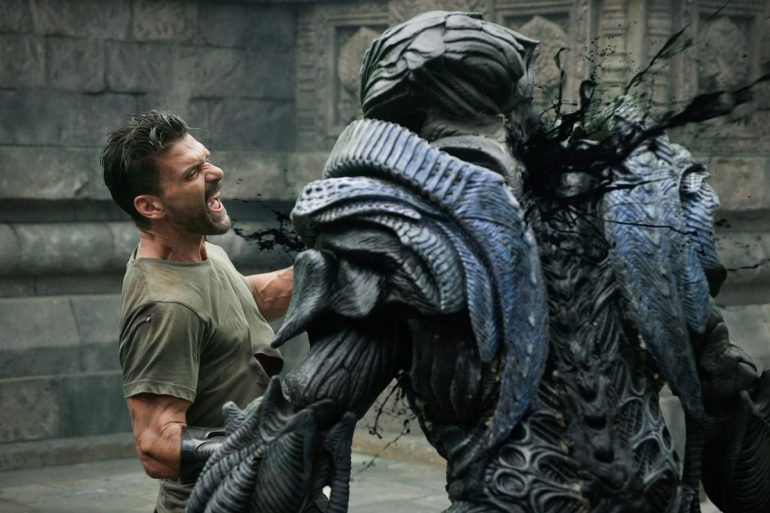 Beyond Skyline is one of the most entertaining and unique action movies of the year.

Plot: A tough-as-nails detective embarks on a relentless pursuit to free his son from a nightmarish alien warship.

Review: The original Skyline came out back in 2010 and was met with a lukewarm reception at best by critics and audiences alike.

When a sequel was announced called Beyond Skyline I think we were all asking the same question: why? Then the cast started to be announced… Frank Grillo from The Purge sequels? Iko Uwais and Yayan Ruhian from The Raid movies? What’s going on? This seems like something… different.

Well, I can safely say that it is and manages to be that rare beast; a truly unique sci-fi action movie that successfully mashes several genres together. It manages to give us Die Hard meets Predator meets War of the Worlds and is frankly beyond awesome (yeah, I went there). It has martial arts, lasers, knife fights and more moving along at a tight pace from the start.

It feels like I have been looking forward to this film for literally years… oh wait, I have. So to finally sit down in a packed theatre on Saturday night and watch it was a day that would be long remembered (to quote a certain Sith Lord).

First of all, don’t worry if you haven’t seen (or didn’t like) the original Skyline; this movie takes place essentially at the same time and is mostly unrelated.

One of the things I liked about the first movie was the way humans were drawn to the blue light of the alien space craft and sucked up into the sky; there was something beautifully horrifying about it and is an idea that’s expanded on in this movie. Everything in Beyond Skyline is a step up from the first entry and even the aliens themselves get an upgrade with awesome Predator-esque suits and some Kaiju action thrown in for good measure. What was most impressive is that the aliens were mostly done practically and are used in fight scenes; they are only done with CG in some of the wide shots. We also get some cool new weapons including an awesome arm knife that Grillo uses to battle the invaders.

Frank Grillo is in full-on John McClane mode as Mark; a cop battling the alien invasion after his son is captured. He has several one-liners and is the kind of badass that’s been sorely missing from action cinema over the years. Grillo reminds me of Michael Biehn, an actor who doesn’t just play a character, he seems to inhabit them and you 100% believe every moment he is on-screen. You just have to watch him in Kingdom or Warrior to see what I mean; Beyond Skyline is the type of role he was born for and he is clearly enjoying every moment.

Iko Uwais and Yayan Ruhian aren’t in the first half of the movie but when they do appear it’s worth the wait and there is some superlative action. Watching these martial artists battling aliens alongside Grillo is one of the most exciting finales you’ll see to any movie this year with some quality R rated kills.

Considering this is a lower budget film you’d be forgiven for expecting the special effects to maybe let it down but on the contrary it’s visually stunning with practical effects and CG meshed together giving us a sense of spectacle rarely seen in a non-Marvel film.

In terms of flaws, if you’re looking for deep philosophical musings about the universe then this movie won’t be for you; this is a straight up action flick that knows exactly what it’s here for: to entertain and that’s exactly what it does.

Overall, Beyond Skyline was superior to the original in every way and was everything I wanted it to be. It’s one of the most entertaining and unique action movies of the year and shows that director Liam O’Donnell has a promising career ahead of him. The movie is released on December 15th when a certain other sci-fi movie comes out but hey, at least this one doesn’t have Porgs.