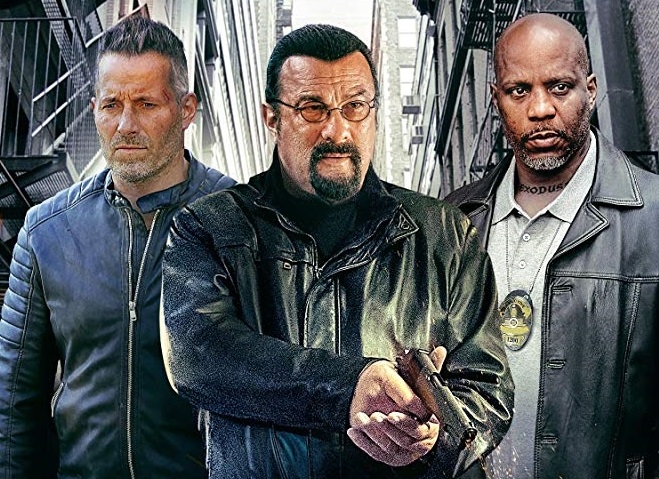 Beyond the Law could have been a fun Exit Wounds reunion but for some reason Seagal and DMX never share the screen together and it lacks any memorable action scenes but it does have a great supporting cast and Johnny Messner is entertaining to watch as he growls his way through various goons looking for revenge.

Plot: When a former detective learns of the murder of his estranged son, he ventures back to the darkened streets he once knew so well. Armed, dangerous and with nothing to lose, he must take on the ruthless local mob in his mission for revenge.

Review: It’s been a long time since Steven Segal’s name could sell a movie; when I first heard about Beyond the Law I’d hoped it was a long overdue sequel to Above the Law but sadly not. I think Exit Wounds was the last genuinely entertaining Seagal flick and this showed promise as it had Seagal and (Exit Wounds co-star) DMX reuniting.

Alas, Seagal and DMX have no screentime together in this movie and Sensei spends the majority of the movie sitting at a table smoking cigars and drinking whiskey while telling his son what a disappointment he is. Seagal is actually a villain in this movie and his son Desmond Packard (Zack Ward) is particularly nasty; he murders what he thinks is just a worthless junkie unaware that it was the son of a cop (Johnny Messner) who vows revenge.

I’ve always liked Johnny Messner as he has that natural tough guy charisma and he is especially gravelly voiced in Beyond the Law where at times it’s hard to understand what he’s actually saying. The same can be said for Seagal who still puts on that Louisiana accent and mumbles his lines so we can barely hear him; it’s hard to believe this is the same man who starred in the Under Siege movies. He shows no emotion whatsoever (as usual) and he only has one brief 5 second fight at the end.

Messner’s cop Frank Wilson looks believably disheveled and it’s him who has the majority of action scenes although they are few and far between; this is more of a slowburn revenge flick rather than an all-out action movie. I think the main problem this movie faced was the lack of budget so there isn’t anything particularly exciting about it with no big set-pieces but it is a down and dirty revenge movie and I liked how certain character’s actions weren’t as predictable as you’d maybe think. Frank was a dodgy cop in his younger days so this is really about dealing with the consequences of the choices he has made and trying to make things right.

It’s not short on violence either and the murder of Frank’s son is rather shocking and cold blooded so there is no doubt that Desmond Packard is an evil piece of work that needs taken out. The finale was a little anti-climactic and I stand by previous statements that over the top bad guy deaths need to become a thing again.

So why did I give is such a high rating? Well, I liked that it wasn’t what I expected and tried something a little different; the supporting cast includes Patrick Kilpatrick (Death Warrant), Sean Kanan (Mike Barnes from Karate Kid III) and Bill Cobbs (Demolition Man) who are all underrated and awesome on-screen. Kilpatrick is only in 2 scenes and I wish he had a few moments with Seagal as they starred in Under Siege 2 together but I just enjoy watching him in any capacity.

Anyway, Beyond the Law finally has Seagal actually saying all his own lines without being dubbed and he has a sizeable role so it’s more than just a glorified cameo; I wish he had more to do though and it’s a shame he didn’t get more action scenes.

DMX doesn’t do much either and a part of me wishes this was a sequel to Exit Wounds instead as it’s a bit of a missed opportunity.

Overall, Beyond the Law is one of Seagal’s better films of late even if he doesn’t do all that much; this is Johnny Messner’s show and he gets to be broody and badass while he’s out for revenge. It’s too bad we don’t get the Exit Wounds reunion as that could have been a big selling point for this movie but the supporting cast and some violent kills make it entertaining enough. Just keep your expectations way down and you just might just enjoy it.