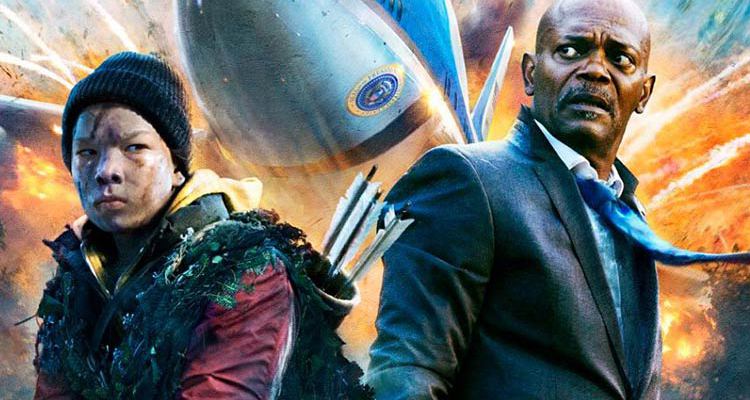 Big Game is pretty predictable and doesn’t break any new ground in terms of story or script but it’s still huge fun and has a refreshingly interesting protagonist in Oskari.

Plot: A young teenager camping in the woods helps rescue the President of the United States when Air Force One is shot down near his campsite.

Review: Big Game feels like a throwback to the 90’s with elements of Air Force One mixed with The Edge. It’s a boy’s own adventure movie with some fun set-pieces and arguably the most badass 13 year old in movie history. The hero of the tale is called Oskari (Onni Tommila) who stumbles upon a crashed escape pod in the forest in Finland.

The pod just so happens to contain the President of the United States (Samuel L. Jackson) who has been betrayed by his own men. The boy and the POTUS begin their adventure trying to outrun the villains and survive the harsh landscape.

It’s all rather familiar but it’s hard not to just get caught up in the adventure and you’ll be totally rooting for Oskari who is out to prove he is a legendary hunter like his father.  It’s interesting to have a lead that is Finnish and he is the tough guy whereas the US President is actually pretty weak. He keeps getting his ass kicked by all the villains and he is most certainly not the Harrison Ford version from Air Force One.

Sadly due to the PG-13 rating they edit out what could have been a fun line; yes, it’s one of those scenes where Samuel L. Jackson is about to swear but instead says “Motherf-“ *gunshot*. This has long since gotten old and filmmakers seriously need to stop doing that; if you’re going for a family friendly rating then just remove the swearing rather than merely teasing it. I think it’s hilarious though as the film is surprisingly violent with people being shot left and right but heaven forbid someone might curse!

There is also some rather crappy blue screen and CGI in parts but the effects are still better than Air Force One.

The script was rather clunky with no particularly memorable dialogue, which is a shame when you have such a great cast at your disposal.

Ray Stevenson is always worth watching and is an entertaining (if predictable) bad guy. It’s also nice to see Jim Broadbent have a major role; I didn’t even know he was in this.

My favourite element of the movie was the music score; it was like classic Jerry Goldsmith with a real old-school adventure movie feel and it added to the sense of fun.

Overall, Big Game is pretty predictable and doesn’t break any new ground in terms of story or script but it’s still huge fun and has a refreshingly interesting protagonist in Oskari.