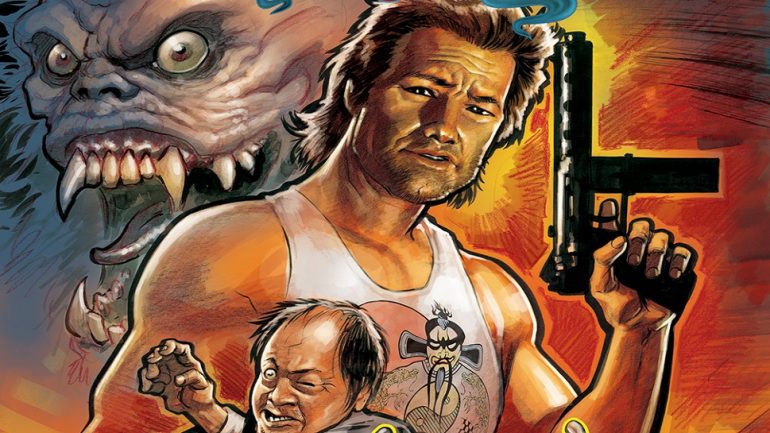 Big Trouble In Little China #1 maintains the fun spirit of the movie and it’s great to see Jack again; it’s a shame the artwork seems a bit too kiddie oriented.

Plot: Jack Burton, a macho, truck-driving adventurer, finds a stowaway hiding on his rig, “The Pork Chop Express”, but that soon becomes the least of his troubles. He helped his best friend Wang save his fiancée from the clutches of a demon, but now the wedding has been invaded by more evil forces with one thing on their minds-revenge against Jack Burton!

Review: Big Trouble in Little China is one of my favourite Kurt Russell movies and Jack Burton is a bit of an action icon; the fact that he’s a bit crap was always his appeal. There are so many quotable lines in the movie, genre fans were always crying out for a sequel that never came… until now.

In #Vol. 1 of Big Trouble in Little China: The Comic we start off immediately after the film with Jack coming face to face with the demon that was riding on the back of the truck. We discover that the demon isn’t trying to kill Jack but has a bond with him because Jack killed Lo Pan, the demon’s former master.

The demon ends up being named Pete, after one of Jack’s former flames and the story feels like a genuine sequel to the classic movie. You can hear Kurt Russell saying the lines and it has a real sense of fun, just like the film. There is plenty of humour and I especially liked how Jack giggles at the name “Wang”.

The comic really captures the spirit of the movie and even starts off with Jack talking into his CB radio on The Pork Chop Express. He is still every bit as inept as he was in the film but that was always Jack’s charm; he’s mostly all mouth and gets by most of the time on luck.

The only thing I wasn’t a huge fan was the artwork style; it looked too kid-friendly and was clearly aimed at a younger audience.

The story really only begins at the end of the volume so it whets the appetite for what’s to come.

Overall, if you’re a fan of Big Trouble in Little China like I am, then this is pretty much essential. Bring on Volume 2.