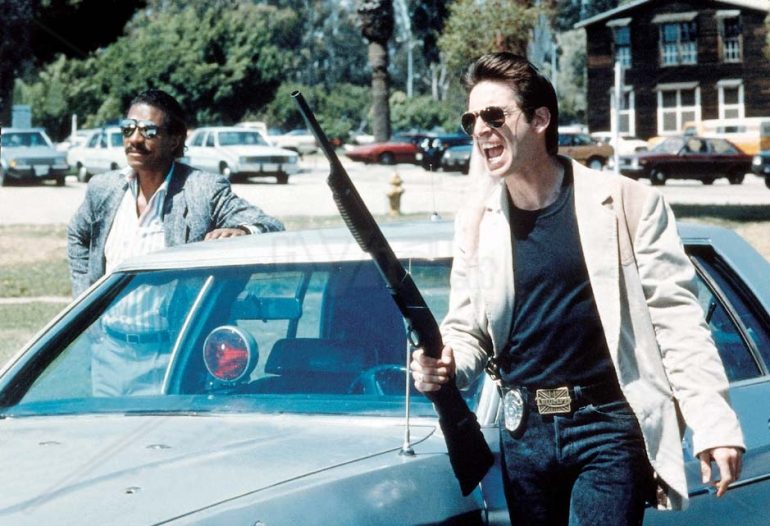 Billy Dee Williams is Number One with a Bullet (1987)

Detectives Barzak (Robert Carradine) and Hazeltine (Billy Dee Williams) are trying their hardest to bring down a drug ring, but they’re meeting with trouble at every turn, which leads the officers to suspect a mole in their midst. When the detectives are dissuaded by their superiors from following a lead about the man behind the whole operation, Barzak and Hazeltine are forced to find the truth on their own without the support of their department.

Number One with a Bullet is a Cannon gem and I think we can all agree that the best way to watch this movie is with a six-pack of Colt .45 as we know “it works best every time”. Billy Dee Williams is at his absolute smoothest in this movie as a cop called Hazeltine who plays jazz in the evenings while trying to seduce beautiful women that come to the club he plays at. Sadly he keeps getting thwarted by his partner Barzak who deliberately ruins his chances mostly because he’s a dick but perhaps there’s an underlying homoerotic undertone as well.

Barzak is actually quite an unsympathetic character who seems to thrive on pissing people off (especially his partner) but also doesn’t pay enough attention to his poor mother or his (now ex) wife who is played by Valerie Bertinelli.

There is an interesting supporting cast too including Peter Graves as Capt. Ferris, Doris Roberts and Mykelti Williamson with The Simpson’s Alf Clausen providing the jazzy score.

In between the shenanigans and buddy banter there is a bad guy called DeCosta who Barzak is obsessed with bringing down as he’s a drug dealer who is apparently evil and that’s essentially all we know about him. He gets very little in the way of characterization or backstory and he’s never on-screen enough for us to really get to dislike him. He’s just there and we basically just await the inevitable showdown between the cops and DeCosta.

This is a light and breezy film and it doesn’t have much in the way of large scale action and yet it’s still just a load of harmless fun. Billy Dee is just the king of cool who never seems fazed by anything even when his partner is behaving like an ass.

There are a few chases and the action highlight is arguably Billy Dee having a showdown in a junkyard against some nameless goons who try to kill him. I thought the finale was very anti-climactic although it was refreshing for the villain to actually get arrested at the end rather than dying spectacularly… it’s no secret that I normally prefer my villains to die in ridiculous ways.

Interesting tidbit: according to IMDB James Belsuhi was originally cast as Detective Nicholas Barzak. Belushi even worked on the screenplay, but other commitments got in the way and he was replaced by Robert Carradine. Belushi received a “screenplay by” on the film.

Number One with a Bullet is not exactly classic cinema but it’s such a wonderfully 80’s film and feels like pure Cannon at its best; the script is still pretty funny, there’s hot chicks galore and it even has a club scene featuring some mud wrestling. So grab that Colt .45, pound a few back and enjoy the taste of nostalgia.