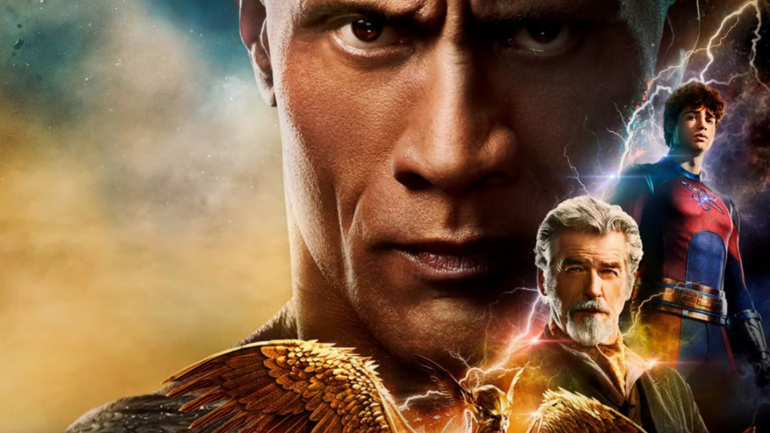 Black Adam is harmless escapism and one of the better superhero pictures of late; if you told me you hate it I would understand as it is generic stuff but it’s well paced, has a sense of fun and it’s action-packed with a great cast and a fantastic music score.

Plot: In ancient Kahndaq, Teth Adam was bestowed the almighty powers of the gods. After using these powers for vengeance, he was imprisoned, becoming Black Adam. Nearly 5,000 years have passed, and Black Adam has gone from man to myth to legend. Now free, his unique form of justice, born out of rage, is challenged by modern-day heroes who form the Justice Society: Hawkman, Dr. Fate, Atom Smasher and Cyclone.

Review: When watching all the trailers for Dwayne Johnson’s latest action picture Black Adam the one word that kept popping into my head was “generic” as it looked like the kind of superhero film we’ve seen many times before. Admittedly that’s exactly what it is and yet I’d be lying if I said I didn’t have a good time watching it.

Dwayne Johnson is well cast as the brooding lead who spends the movie telling everyone he isn’t a hero despite doing mostly heroic things; I think Adam may be one of his best characters to date and I look forward to seeing more of him in the future. He is supported by a great cast too with the JSA (Justice Society of America) especially Pierce Brosnan who was the real reason I wanted to see this movie and he provides a lot of the heart as Dr. Fate. I also thought Aldis Hodge looked the part as Hawkman who believes in what the JSA does however, when the people of Kahndaq turn to Adam as their champion rather than them it immediately makes him want to take down Adam even more.

I also enjoyed the dynamic between Cyclone and Atom Smasher; I was expecting her to belittle him at regular intervals as is the case with many films these days, but she was actually appealing and they made for a likeable pair.

The story is nothing new but considering the film is 2 hours long it didn’t feel like it moving at an almost relentless pace. The villain was also rather bland and forgettable, but he was just there so Adam could discover who he was born to be. I could have done without the teenage kid as well but then that is the target audience for these movies.

Lorne Balfe is proving himself one of the more interesting composers working in movies today and this is one of his best with a rousing main theme with epic choirs which really help amp up the action scenes.

Although there is a lot of CG (some better than others) you can still see everything that is going on during the plentiful action sequences. We do of course get the obligatory laser going into the air during the finale which made me laugh out loud as I feel like that has to be in every superhero movie but it only lasts a brief moment.

The script isn’t the greatest and there aren’t too many memorable lines of dialogue, but it does have some one-liners which is always a plus.

I won’t spoil the mid-credits scene in case you have no idea what it is but it got our audience cheering and is why I gave this film an extra half star.

Apparently this was initially rated R so hopefully we get an Unrated cut on Home Video as that would have made this film stand out a little more; more violence wouldn’t necessarily make for a better film…  who am I kidding? Sure it would!

Overall, Black Adam was far more entertaining than expected; it doesn’t reinvent the genre but it’s a diverting 2 hours with lots of fighting and explosions to be worth checking out on the big screen.