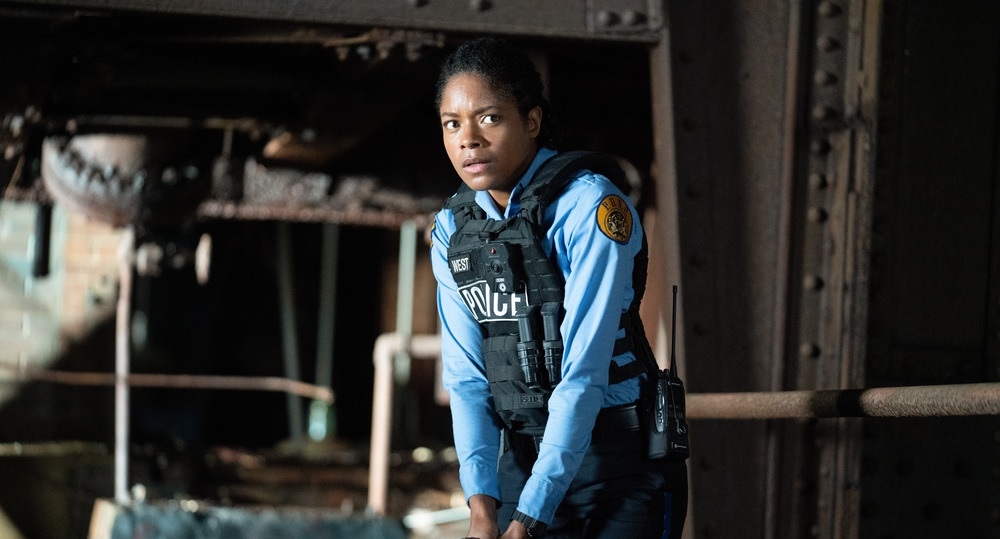 Black and Blue is an intense ride that grabs you and doesn’t let up until the end. Yes, it is formulaic and perhaps a touch too long but it’s worth seeing on the big screen just to hear the audience react at some key scenes and for Frank Grillo’s nasty villain. Naomie Harris is a complete badass but never loses her humanity so we root for her right up until the satisfying finale.

Plot: A rookie policewoman in New Orleans inadvertently captures the shooting death of a young drug dealer on her body cam. After realizing the murder was committed by corrupt cops, she teams up with the only person from the community who’s willing to help her. Now, she finds herself on the run from both the vengeful criminals and the lawmen who desperately want to destroy the incriminating footage.

Review: I’ve been wanting to see this for a while as you could tell from the trailers it was going to be an intense ride and it didn’t disappoint. Black and Blue is very much a movie for the moment exploring race relations, police corruption and their treatment of the black community in America. If you didn’t hate cops before this movie then by the end you’ll likely never trust one again as they aren’t exactly portrayed in a positive light. The problem is we see videos of police mistreating people regularly so it’s not like a story like this is hard to believe.

It wastes no time getting going quickly establishing that Rookie cop West (Naomie Harris) is not the same as other cops who treat the local community like “animals”. She is from the neighbourhood but was away in the army for several years and comes back to a place she barely recognizes. In the very opening scene, she is harassed by police while out jogging just because she is black; then they find out she is also on the force and they reluctantly let her go.

It’s a tough watch that will have you on the edge of your seat right away, but it doesn’t really say much other than the majority of police in America are bad without offering any real solutions.

West is one of my favourite protagonists of the year who is an incorruptible hero that will stop at nothing to bring the crooked cops to justice that murdered 3 young men in cold blood. She is intuitive, can handle her self in a fight but as she says she is just a person and sees others the same way. This doesn’t gel with other cops who see it as “us vs. them” so West doesn’t know where to turn.

Then along comes Milo ‘Mouse’ Jackson (Tyrese) as the reluctant hero who helps her escape her pursuers even though he is putting himself in danger. This may be one of Tyrese’s best roles to date as he manages to remain calm and cool without ever screaming like a bitch like he does in the Fast & Furious franchise.

Frank Grillo is the big bad and was the main selling point for me to see this movie as he is one of my favourite actors working today. His corrupt cop Malone is a monster and Grillo brings the required menace with ease. I also love Mike Colter (Luke Cage) who plays local crime boss Darius who wants revenge on the person who killed his nephew. He is a more interesting character than you may think at first and he is loyal to his family but is not someone you want to get on the wrong side of.

Other reviews have described the movie as formulaic which it is and you can guess how it is going to go just from the trailers so there aren’t many surprises. It is also a little too long and perhaps a few scenes could have been trimmed just to make it tighter.

In terms of action it’s mostly just West running and hiding with some shoot-outs but when she has to throwdown she can hold her own and her final fight with Malone is satisfyingly vicious.

Overall, Black and Blue gives us is a believable female badass who remains a good person that believes in right and wrong even when everyone else around her doesn’t. It’s a riveting good time that isn’t overly preachy with its message but it isn’t just an empty headed action flick either. Frank Grillo is as fantastic as you’d expect as the villain but this is Naomie Harris’ movie and I still think she should get her Moneypenny spin-off as I’d watch that in a heartbeat.