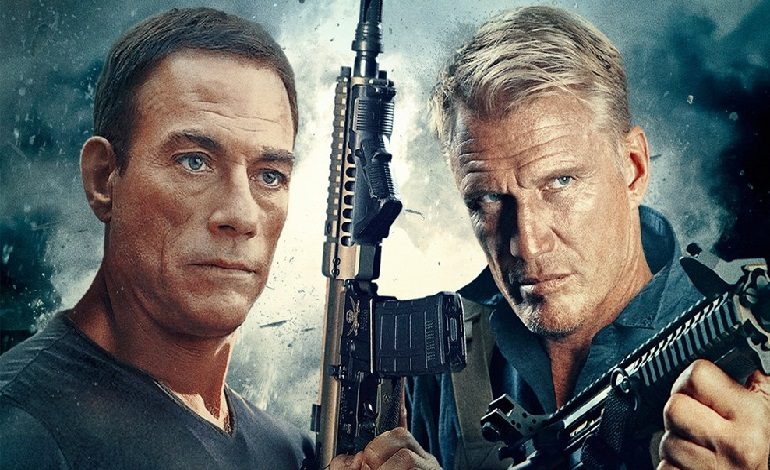 Despite JCVD looking half dead Black Water is elevated by Dolph Lundgren (even if he is underused) and some satisfyingly bloody shoot-outs.

Plot: A faithful and longstanding CIA operative Wheeler (Jean-Claude Van Damme) has been drugged and brought aboard the Blackwater, a high security prison repurposed from a submarine. There, Wheeler is being tortured into revealing the location of a highly profitable and secret CIA dongle that allows for the decoding a drive containing information about CIA operatives around the world. Trapped on the ship and under fire, Wheeler must befriend rookie agent Cassie (Jasmine Waltz) and an ex-German agent Marco (Dolph Lundgren) in order to get off the ship alive.

Review: I’ve been looking forward to Black Water for what feels like a very long time; JCVD and Dolph Lundgren in a movie again but on the same side this time? Sold! It hasn’t had amazing reviews so far but what intrigued me about this movie was how different it looked from the usual JCVD vehicle.

Let’s get this out of the way now; if you are looking for a lot of fight scenes then you may be disappointed as there are very few but there is still a satisfying bodycount.

There are several impressive shoot-outs (with squibs too I might add) and it’s during the final half hour when it all kicks into high gear with JCVD and Dolph teaming up to take out the trash.

Despite never reaching Crimson Tide levels of tension Black Water is not without its moments; the lighting worked well in creating the mood and it builds up nicely leading to a satisfying finale (even if there is a slight dip in pacing half way through).

Dolph doesn’t get to do much in the first part and is a criminally underused but what screentime he does have he gets some nice banter with JCVD.

Van Damme himself looks awful, as if he’s just awakened from a 15 year coma and he struggles to seem engaged in the role which is a shame as this it could have been one of his best movies in years. He shows no personality at all and it’s only thanks to Dolph that keeps things interesting.

Patrick Kilpatrick shares the screen with JCVD once again as a villain (of course) which was a nice throwback to Death Warrant and there’s even a familiar line of dialogue which fans will enjoy. He only has a small role but its an important one and I’ve always found Kilpatrick to be an underrated actor and an always entertaining bad guy.

It’s actually open for a sequel which I would be interested in so we could maybe have some more of Dolph/JCVD one-liners.

Overall, Black Water is a very different movie for both Dolph and JCVD which is never a bad thing and it’s fun to see them on screen together again however, the lack of fight scenes and the fact JCVD looks like shit may put people off.