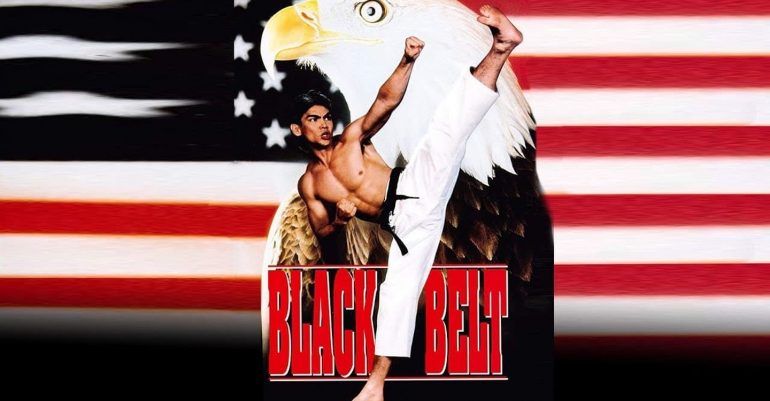 Blackbelt is worth watching for Matthias Hues as serial killer John Sweet and Don Wilson doing what he does best; it’s too bad Shanna is so annoying that you almost cheer for the villain.

Plot: An ex-cop is forced to take on the greatest legends of the martial arts world; he fights off all attacks while defending a beautiful rock superstar against the crazed attacks of a deranged fan.

Review: Blackbelt has always been one of my favourite Don “The Dragon” Wilson films mostly due to the really rather warped storyline and Matthias Hues’ sadistic killer John Sweet. Hues is always an absolute beast when he’s playing a villain and I think John Sweet is one of his best roles.

He’s a bit Norman Bates as he’s basically obsessed with his dead mother (who he killed) and he goes around brutally killing women who remind him of her. It’s up to ex-cop Jack Dillon (Wilson) to stop him so he agrees to protect singer Shanna who has become Sweet’s latest target.

Personally, if I were Dillon I’d have left Sweet to it as Shanna (Deirdre Imershein) is such a horribly unsympathetic character; she comes across as a spoiled bitch who spends most of the movie being rude to Dillon so you never care if she lives or dies. She does at least get naked for the uncomfortably long and awkward love scene…

“The broken nose is for the girl, the vasectomy’s free.”

Ian Jacklin also has a small role as a barroom goon (as do several other real-life martial arts heroes) but he would go on to star in his fair share of action flicks which I’ll be covering soon.

Blackbelt is 85 minutes long and has regular fight scenes, numerous violent kills and even a car chase; it remains one of Don Wilson’s best movies but also Matthias Hues who shines as the maniacal killer Sweet.

I liked the music score too which is big and orchestral and even has a memorable theme.