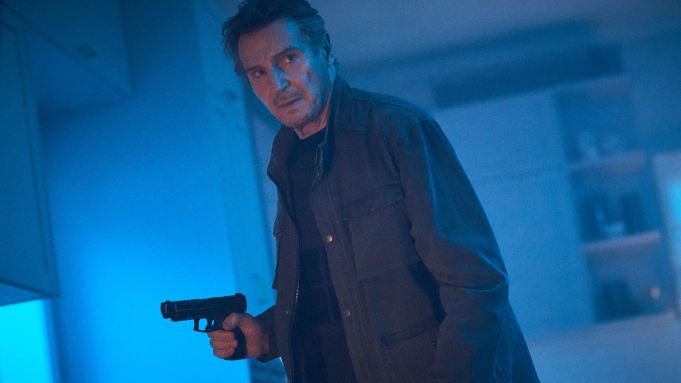 Blacklight is a by the numbers Neeson action thriller which has a few entertaining action scenes but the story just isn’t exciting so you never feel involved or all that interested in the outcome. Wait for Netflix.

Plot: A troubled off-the-books fixer for the FBI (Neeson) tasked with pulling undercover agents out of dangerous situations finds himself in the middle of a deadly conspiracy when one such agent starts questioning the very people he’s working for. Our fixer must not only track down the agent, but also find out the truth – a truth that may strain even his questionable moral code.

Review: It’s February which means it’s Neeson Season and this week he stars in the action thriller Blacklight from director Mark Williams (who also helmed Honest Thief starring Neeson). Sadly Blacklight isn’t much of a step up with a story that never really gets going lacking anything memorable or exciting.

Neeson is his usual appealing self but his character Travis Black suffers from OCD which has affected his relationship with his daughter and granddaughter. His condition made him especially suitable for his line of work as a “fixer” for the government. Travis wants to repair the mistakes he’s made with his family and spend more time with them but his employers don’t feel the same way.

The trailers made this out to be quite different from what Blacklight actually is; it looked action packed and exciting. It has its moments and there is some action but stunt doubles are noticeable and strangely it never grabs you as a viewer.

I did like the dynamic between Travis and his boss/old friend Gabriel Robinson (Aidan Quinn) where it’s not a straightforward arrangement. Quinn’s steely eyes make him well cast as the antagonist but he never gets a satisfying showdown with Travis instead giving us an ending that fizzles out.

The poster promises “They’re Gonna Need More Men” and Neeson himself delivers a similar line and yet he doesn’t do much in the way of ass-kicking and we only get like 2 henchmen for him to take down.

Blacklight also has that horrible desaturation effect so everything looks blue making the film ugly to look at and some scenes hard to actually see what’s happening.

The action is at least well executed with some fights and a few exciting car chases; we also get some shoot-outs but it needed more for the finale and maybe a climactic fight which we never get.

The music score is one of the best aspects of the film with some nice percussion adding to a pervasive sense of threat.

Despite a few entertaining moments this feels like something we’ve all seen before and this isn’t a movie I have any desire to watch again.

Overall, Blacklight isn’t a movie you need to rush to the cinema to see; it lacks any memorable set-pieces and the story takes too long to get where it needs to making it lack thrills. It’s maybe worth watching on Netflix but otherwise it’s forgettable stuff.