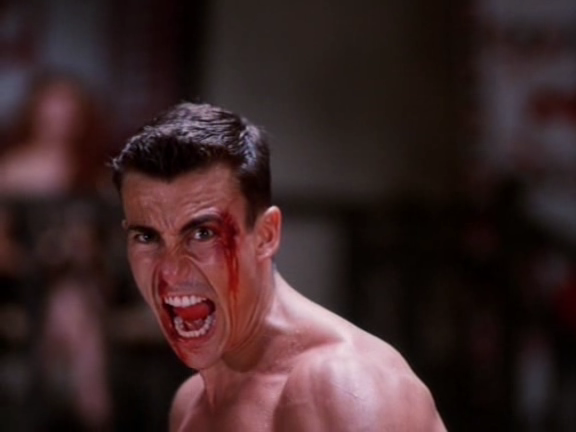 Bloodsport III is a rather silly entry to the series but that kinda makes it even more fun; it has plenty of fights, a good villain and a sympathetic lead.

Plot: Bloodsport III brings us back to the world of Alex Cardo. This time he must battle in a fight to end all fights – The Kumite, the most vicious warrior alive – Beast. He must not only battle for his own honor, but also avenge the death of Sun, his mentor, teacher, and spiritual “father”, when Sun is spitefully killed by crime boss Duvalier.

Review: Although not as good as the first two movies in the Bloodsport series, Part 3 is still extremely entertaining. Daniel Bernhardt is very charismatic and a great lead; he’s almost a James Bond style character in this movie.

It’s definitely the silliest of the movies for one scene alone; the Bond style scene where he is in the casino in Paris which is rudely interrupted by a group of ninjas who try to rob the place. Don’t you just hate when ninjas rob your casino? I love movie logic.

Anyway, our hero of course, beats all of those pesky ninjas up and and everyone thinks he’s awesome.

The best thing about the movie is John Rhys-Davies as the bad guy Duvalier; wish I’d seen this before I interviewed him last year, that would’ve been fun. He is clearly having a ball as the slimy villain, but sadly doesn’t get his comeuppance at the end. I understand why, it just was a bit of a let down.

The story isn’t all that interesting and there are a lot of pointless training montages; he’s already the champion so what does catching an arrow change?

The fights are all excellent with some genuinely impressive martial arts; I’m surprised Bernhardt never became a huge action star as he could really kick some ass and oozes likability on screen.

It’s very well paced and flies through in no time so it’s actually worth a watch.

Overall, Bloodsport III is a rather silly entry to the series but that kinda makes it even more fun; it has plenty of fights, a good villain and a sympathetic lead.