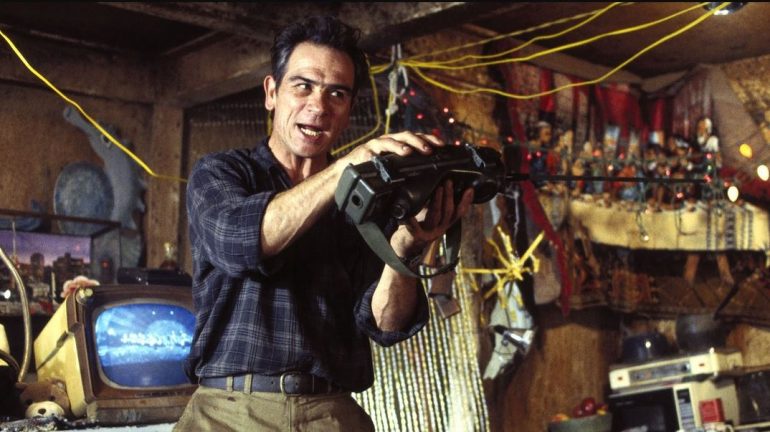 Blown Away is engaging enough but the laughable accent from by Tommy Lee Jones distracts from an otherwise explosive actioner.

Plot: After staging a particularly gory jailbreak, Irish Republican Army agent Ryan Gaerity (Tommy Lee Jones) makes his way to Boston and begins systematically picking off members of the police bomb squad. The leader of this team, Jimmy Dove (Jeff Bridges), is set to retire, but the recent spate of bombings lead him to stay on in an attempt to save as many of his men as possible. It isn’t long before he discovers the culprit is his old colleague Gaerity, seeking revenge from their shared past.

Review: This is a long forgotten actioner from the 90’s starring Jeff Bridges and Tommy Lee Jones; the accents are some of the worst you’ll ever hear and I keep waiting for Tommy Lee Jones to reach for his Lucky Charms. His character is the hilariously named Ryan Gaerity, because it sounds Oirish… shame he doesn’t.

If you can get past the accents then you’ll have a pretty good time as there are some pretty impressive explosions, as you’d expect from a movie called Blown Away.

Jeff Bridges is awesome as always and his character is likable even if he is an ex-terrorist. But hey, at least he’s an “ex” so that’s not so bad.

The story gets rather tense with some great set-pieces and it moves along at an excellent pace.

You’ve also got Forest Whitaker classing up the joint as an arrogant newcomer to the bomb squad along with Lloyd Bridges in one of his final roles.

Alan Silvestri’s score is not bad but it’s rather forgettable and not one of his best.

Overall, Blown Away has some of the worst accents in the history of movies but if you can ignore that then you’ll have a blast… literally.