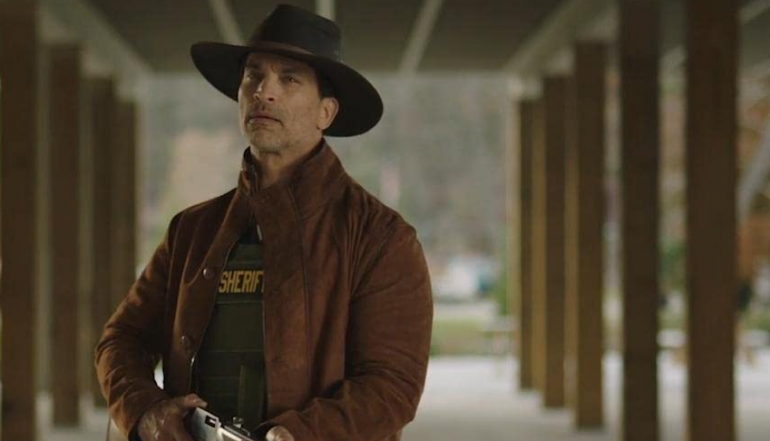 Blue Ridge may feel like it’s setting up a TV series but Jonathan Schaech makes for an appealing hero and there are enough fight scenes to keep things moving.

Plot: A murder in a sleepy town at the heart of the Blue Ridge Mountains shocks the community and refuels a longtime feud between two families.

Review: Blue Ridge feels like an extended pilot for a TV series but it has nice production values and despite being a little corny it’s an engaging and well paced 87 minutes. I love a good whodunit and Blue Ridge managed to keep me interested for the full run time as we wonder who the killer could be.

Johnathon Schaech (who would have made a great Batman in my opinion) is our protagonist Justin Wise, who is the new Sheriff of a small town called Blue Ridge; when someone gets murdered it ignites a decades old family feud so it’s up to Wise to prevent further bloodshed while trying to solve the murder.

Schaech is well cast as the Sheriff, and he looks the part in the fight scenes giving a bit of a Walker: Texas Ranger vibe and he is also immediately appealing as a character. I like the idea that he can beat up three guys in a fight but like the rest of us he totally falls apart when it comes to asking a girl out on a date.

Graham Greene gives a moving performance as the father of the murdered girl and we can totally understand his resentment towards the Wade family.

Blue Ridge looks like an appealing town giving off the smalltown Americana vibe but it also has its share of secrets which I feel could be explored if this ever became a television series. The characters are all set up and there is some definite potential for future stories.

In terms of action there are some fight scenes as I mentioned above but nothing overly spectacular; I think it’s going more for characters over action but if it had maybe a bigger budget we could get a few more set-pieces.

Overall, Blue Ridge has a great protagonist in Jonathon Schaech and some solid fight scenes; as I said it feels like a TV movie but that gives it an appealing old-fashioned charm so if it ever did become a series I would tune in for it.