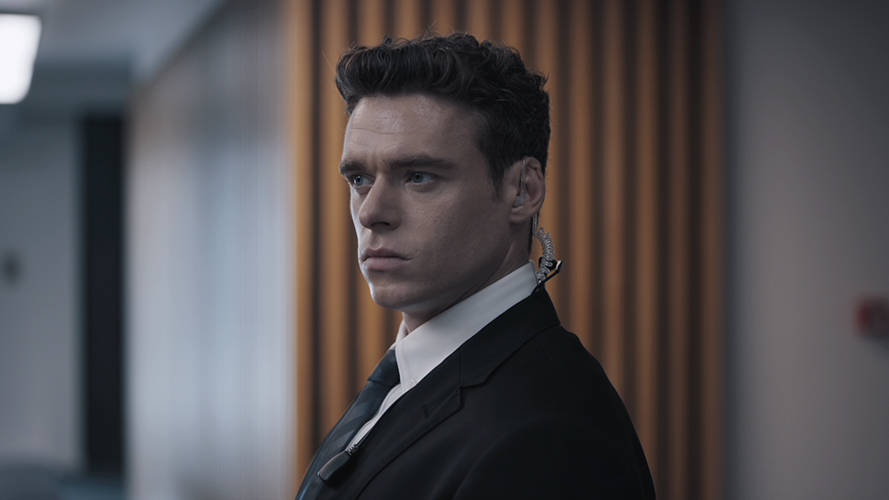 Bodyguard is worth the hype and one of the best British spy shows I’ve seen for some time; I think it’s the kind of direction Bond could go in for a modern audience and Richard Madden is one to watch especially after his Golden Globes win last night.

Plot: War veteran David Budd finds work as a police sergeant with London’s Metropolitan Police Service, in the Royalty and Specialist Protection branch. He is assigned to protect the home secretary, the Rt. Hon. Julia Montague MP, a controversial and ambitious politician who is described as “the sociopath” by one of her aides, and who has plans to introduce invasive new surveillance powers for security forces. Finding himself increasingly at odds with Montague’s policies and personality, and dealing with physical and psychological scars from his time serving in Afghanistan, volatile Budd is torn between his beliefs and his duty to protect.

Review: Bodyguard caused quite the stir when it came on the BBC last year with its unpredictable storyline keeping viewers guessing as to what was really going on. I only saw the final episode at the time so now that it is on Netflix I thought I would watch the full show and do a review.

Bodyguard wastes no time in getting going with an attention-grabbing opening scene which starts with a black screen and the sound of what we think is machine gun fire but is actually a train moving quickly so it immediately wrong foots you. This is where the show excels as entertainment as it subverts expectations (to quote Rian Johnson) and refuses to be predictable and generic. We are introduced to our protagonist David Budd who is sitting on the train with his kids but he sees someone suspicious when the train stops and finds out that a potential bomber is on board; so begins 6 episodes of wall to wall tension with twists and turns galore. It could easily have been a British 24 but I think Bodyguard has more sophistication to the characters and the script.

The lead actor Richard Madden who plays Police Bodyguard David Budd has since been rumoured to be up for the next James Bond after Daniel Craig hangs up the tux. At first I was against the idea as he didn’t come across as particularly suave but he does have a natural toughness (he is a fellow Scot after all) so would certainly feel authentic as a secret agent; he practically is Bond in this show anyway as it has espionage, terrorism, sex and conspiracies making for a very modern and exciting series.

What’s interesting about the character of David Budd is just how flawed he is; he is very much an anti-hero and throughout the show you’re wondering if he really is the good guy or not. He makes questionable choices, is a borderline alcoholic, separated from his wife, hides evidence and suffers from PTSD so he is a layered and fascinating character to watch. I thought Madden made him feel like a real person and his dialogue felt very natural; I liked little things for example, how he called his son “Big Man” which is very Glasgow.

The script to Bodyguard in general is the highlight of the series as it is sharp and well researched so it feels like the creator Jed Mercurio could well have a background in the security services/police.

The second episode is arguably he best as it is packed with edge of your seat tension as David and the Home Secretary are under attack from a sniper and they are trapped in a car; it’s filled with suspense and an expertly crafted scene. This episode also has the van attack on a primary school which is the most shocking of the series and one of many elements about the show which could easily happen in real life (and has).

Some moments do stretch credibility however, for example I never bought why Budd hid that he knew the sniper who attacked the Home Secretary as it would always come back that they served together in the military. Apparently the whole idea of Budd and the Home Secretary having the affair would also be unlikely in reality however, it is a television series and not a documentary so it’s not a deal killer.

It’s a beautifully shot series with London looking very shiny and appealing rather than the grey misery we usually see in British shows; the action is well done and rather than using unconvincing CG during any scenes which require big budget explosions they go for using sound and showing the aftermath rather than something cheap looking which works far better.

This is more about trying to stop terrorist attacks so don’t go in expecting hand to hand combat as there isn’t any of that but it is still filled with action and tension while also giving us plenty of characterization. The relationships are believable and Budd’s separation from his wife was handled well where neither character was painted as a villain; he clearly had mental issues after his military service and by the end of the series he finally agrees to seek help for it thus beginning a reconciliation with his spouse.

The music is very much inspired by The Dark Knight with a constantly rising pounding tone which really amps up the tension so you’re always feeling uneasy with the threat of a potential terrorist attack at any time.

Overall, Bodyguard isn’t perfect but it’s incredibly slick with a star-making turn from Richard Madden and some impressive tension-filled set-pieces. It’s on Netflix now and I highly recommend a binge watch ASAP.