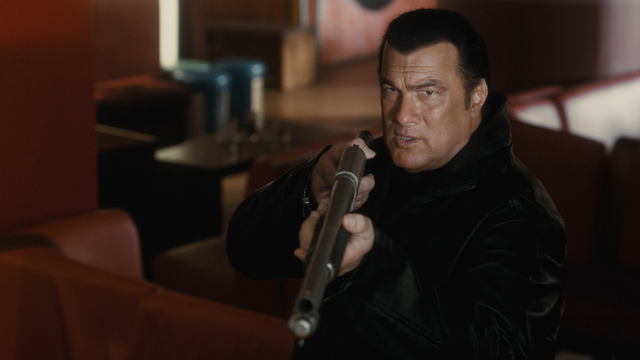 Born to Raise Hell has some decent action and a good villain but it’s let down by the amateurish dubbing making it feel unfinished.

Plot: A hard core Interpol Agent is assigned to an Eastern European task force to target gun trafficking and dope running throughout the Balkans. While investigating a Russian gun dealer, his team is caught in a bloody street war between a Gypsy gang and the Russians, leaving one task force member dead. Fueled with vengeance, he leads us on an action packed thrill ride while avenging his friend’s death.

Review: Here’s another Steven Seagal movie that was bizarrely dubbed; as annoying as it is, the film still manages to be pretty entertaining. Darren Shahlavi plays the villain and he’s a real nasty piece of work in it too; he’ll rape and murder without mercy. Some of it is actually quite shocking and it deserves its R rating and then some.

Steven Seagal is the same as always, bitch slapping his opponents left, right and centre, but he does have some choice lines particularly “Trust is not one of my more spectacular attributes.”

The story is quite interesting and I do enjoy the Eastern European settings as it makes it feel more authentic. It’s also well paced and despite the (very) low budget, there is plenty of action and you won’t be checking your watch too often.

It is a little predictable as the guy whose wife is 1 month away from giving birth is like the old “two days from retirement” cliche. It’s also really uninteresting that Seagal is always so invincible; I enjoy the invincible hero as much as the next guy but I do like to see the hero get injured a bit and give a greater sense of threat.

The direction is a bit off in places too with the annoying freeze frame going on during the action scenes which hinder rather than help them.

Overall, Born to Raise Hell has some decent action and a good villain but it’s let down by the amateurish dubbing making it feel unfinished.