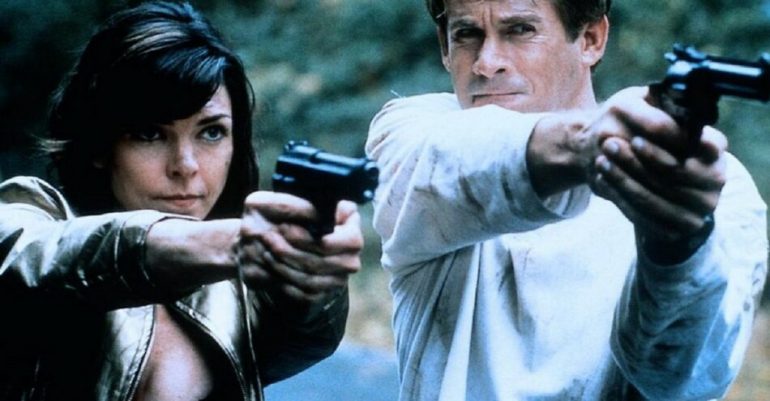 Michael Dudikoff stars alongside Lisa Howard as a pair of mismatched bounty hunters and former lovers who work together to capture fugitives and fight for survival against endless goons. So today for a bit of fun I thought I’d do a versus to see which is the better film.

Plot: Jersey Bellini is a bounty hunter who forms an uneasy partnership with a rival to capture a fugitive. But the hunters soon discover that the crook is also the man the mob most wants dead! Ready to battle anyone in their way, these hard-hitting Bounty Hunters won’t quit until they’ve brought in their man… and brought down the mob!

Michael Dudikoff stars alongside Lisa Howard as two bounty hunters who reluctantly work together to capture a fugitive; it’s nothing new and the script isn’t the greatest but it has a fun, lighthearted tone and regular action scenes to keep things moving.

Dudikoff is at his amiable best as the goofball Jersey but I especially liked Lisa Howard as B.B. who can kick as much ass as Jersey and is the perfect foil for him.

Their banter is predictable and some of it comes off more as annoying rather than anything overly serious but it’s harmless fun and even has some nudity too which is always a plus.

In terms of action we get fight scenes, explosions and shoot-outs so it’s never dull and makes for a fast 95 minutes.

Overall, Bounty Hunters may not be anything new and the script isn’t especially memorable but it’s a fun time with our two bickering leads still being likeable while taking out the trash.

Bounty Hunters 2: Hardball clearly has a larger budget as the action is bigger and better in every way; the final 20 minutes is pretty much filled with constant explosions and we get some awesome kills in this movie too for example, a bad guy being killed by a harpoon. There are fight scenes every few minutes so like the first movie Hardball is never dull.

Tony Curtis (yes THAT Tony Curtis) plays one of the main villains but only really shows up at the beginning and end so he was probably only involved with the film for one day. The main antagonist is really Carlos (played by Steve Bacic) and he’s quite psychotic; he’s the type of bad guy who beats up or kills his own men when they fail him so he is suitably hateful and makes more of an impact than the villains from the first film.

The script is better here too and Michael Dudikoff and Lisa Howard still make for a fun duo bickering back and forth but this time it doesn’t get annoying. I also like that there is even more gratuitous nudity in this movie which is an added bonus.

Overall, Bounty Hunters 2: Hardball is a blast with a genuinely explosive finale, diabolical villains and our two leads as appealing as ever.

This is hard as I actually really enjoy both Bounty Hunters movies but I’m going to have to go with the second movie as it has better villains, bigger action and a guy getting killed with a harpoon. I miss seeing Michael Dudikoff in movies and he really should be in the Expendables franchise. He has that easygoing likability on screen so here’s hoping he comes back to doing more movies someday.