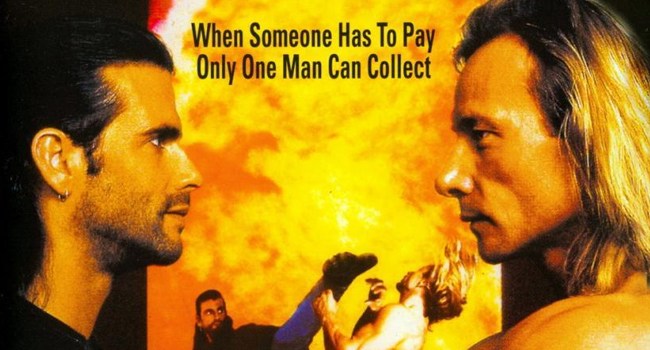 Bounty Track is pretty entertaining but it’s not one of my favourite Matthias Hues movies, despite him being awesome in it.

Plot: Almost the whole staff of a tax consultant office is slayed by a team of professional killers, only Paul Damone can escape. He didn’t know that his partner used to wash gangster Louis Sarazin’s money and had to testify as chief witness against him. Paul’s brother Johnny, best bounty tracker of Boston, visits Paul to protect him, but can’t prevent that he and his pregnant wife are targeted by the same team. Now Johnny’s out for revenge…

Review: I’m kind of on a Matthias Hues tip just now and what better way to finish off the week than reviewing Bounty Tracker?

Now, if you’re looking for a movie with any kind of production values or budget then you’ll be disappointed as this movie has a budget of 3 dollars.

The hero of the piece is played by Lorenzo Lamas who is a pretty decent action star but like Jeff Speakman, it’s easy to see why he never became A-List.

He would be better suited to a Timotei commercial instead as all he does is brush his hair out of the way… in between beating up bad guys.

The saving grace of the movie is Matthias Hues as the villain; he’s so good at it though and this is one of his best characters. He’s a nasty piece of work who even kills a guy in a wheelchair… who does that?

I nearly forgot about the fight scene in the dojo where Lamas takes on 4 or 5 guys and destroys them in what is easily the best fight scene of the movie. The final fight between Lamas and Hues is awesome as well though.

There are the obligatory Latino stereotype gang members that Lamas teams up with who conveniently show up whenever he seems to be in trouble.

The music is cool in places with some nice electric guitar, which is always welcome.

Overall, Bounty Tracker is pretty entertaining but it’s not one of my favourite Matthias Hues movies, despite him being awesome in it.