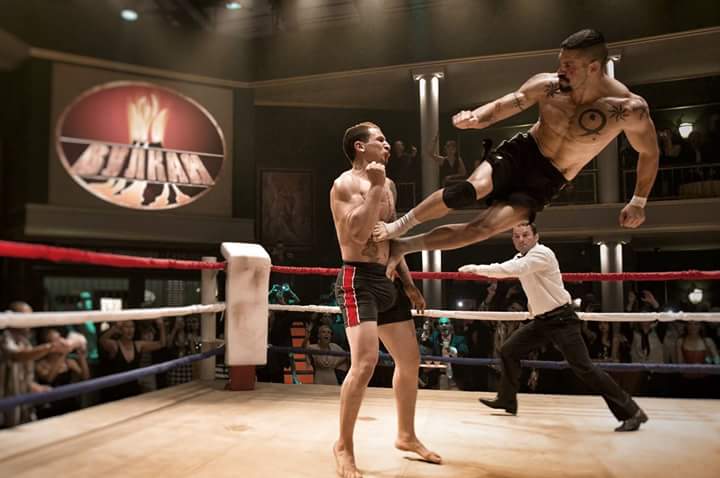 Brahim Achabbakhe stars in one of his biggest roles to date opposite Scott Adkins in Boyka: Undisputed as Igor Kazmir. Brahim stops by and chats with The Action Elite about working on the movie and more.

You have one of your biggest roles to date in Boyka: Undisputed as Igor Kazmir; what appealed about the character?

I think what appealed was his arrogance but at the same time high level of martial arts. I believe the character is a very strong fighter but his weakness is his arrogance. But that arrogance and cockiness make Igor very enjoyable to watch on screen I believe.

What was a typical days training regimen for Undisputed?

I was shooting Never back down no Surrender as I was preparing to shoot Boyka Undisputed. I would wake up eat 6 egg whites with tuna and a bowl of oats. Then go to the gym for 45 minutes and work out one body part per day. I would eat 5 times a day probably and do my martial art training as usual. The thing is I am always training all year around so I never really need to get ready for any roles that requires me to be in shape. Like my friend Scott Adkins say, no need to get ready, stay ready.

Was it one of the toughest roles to prepare for physically?

Not really. I love training and when I am not shooting a movie, this is what I always do. I laugh a lot when I read people talking about how hard it was to get ready for this role or that role. Working in movies is a blessing and getting paid to stay in shape and shoot I mean it is a dream job at least to me. So I think it was fun in the physical part but in the acting part yes it was something I really worked on before heading to Bulgaria. I made sure I would not copy the character of Boyka so this is why I chose to play Igor as an arrogant character. Getting it right what a challenge.

You’ve worked with Scott Adkins on various projects now; how would you describe your working relationship?

I think it is a very friendly working relationship. He always brings his best on each movie and treats everyone on set very nicely. I hope I can do more films with him.

How was the experience of working with so many other great fighters?

Tim Man is a very good friend of mine so working with him was great fun. Tim is one of the best martial art filmmaker I know and his work ethic on Boyka was amazing. He made sure to make everyone look great. There was also Andy Long, Emilian De Falco who both did an amazing job. I did not have time to interact with all of them a lot but meeting them was a great experience.

How challenging is it to make sure fight scenes look different from each other?

Very challenging I would say cause honestly everything has been made already. It is very hard nowadays to come up with new concepts cause the audience is getting more demanding and understands about wires, visual effects or camera tricks. The choreography and camera work is what will make each fights in a movie different from each other. Let’s say for this first fight I am gonna move the camera a certain way using shoulder cam a lot but for the next one I might use a lot of dolly track and play it as a single shot. Also you got to go back to the script and ask yourself what style the character gonna use when he fights, what’s his background. Mostly directors will tell you what martial art style they want each character to use.

What is your process normally for putting a fight scene together?

Depends really but I mostly use 2 techniques. First one is when I got time and know nothing will change on the day of shooting. I would write down the fight scene on paper like writing a script and play it in my head seeing the editing go as I write it down. Then I would shoot a pre vis when director ask me to and if I am action director use this pre vis on the shooting following it cut by cut. Second technique is when time restrictions and changes happen on the set. I would come up with the fight as we shoot and this requires a very good knowledge of the camera and also editing cause you edit in your head as you choreograph and shoot so you got to be 100% sure of your choices. I call this last technique the Hong Kong style of action cause Hong Kong martial art directors would use this technique a lot.

What’s the atmosphere like on an Undisputed movie set?

The atmosphere was amazing and only good vibes. Isaac Florentine makes everyone around him feel really comfortable and the whole crew was really good. It was one of the best movie set I worked on and even we had time restrictions, we always worked in calm and harmony.

What did you personally take away from the film?

I took away my best acting role to date and also I saw what it took to portray a proper villain.

Do you think there should be another entry in the Boyka series? Personally, I thought it ended perfectly…

I think may be they should keep going but in an other direction. Nowadays they have web series, Netflix tv shows so may be why not go this road. Boyka: Undisputed was downloaded illegally by lot of people which hurt a lot the film, but if there could be a way to continue the series using the internet like web series or Netflix it could be a smart way to make profit for the producers.

What types of roles most appeal to you when you get a script?

Bad guys roles, I just love it. It is something I believe I do well and I would love to keep going in this direction.

I just finished a Netflix tv show called The Legend of Monkey for which I served as fight choreographer. I also just wrapped working on Big Brother an upcoming Donnie Yen film as an action performer in Hong Kong. Kenji Tanigaki and Mike Leeder brought me on that one and it was a great experience to work with Donnie Yen.