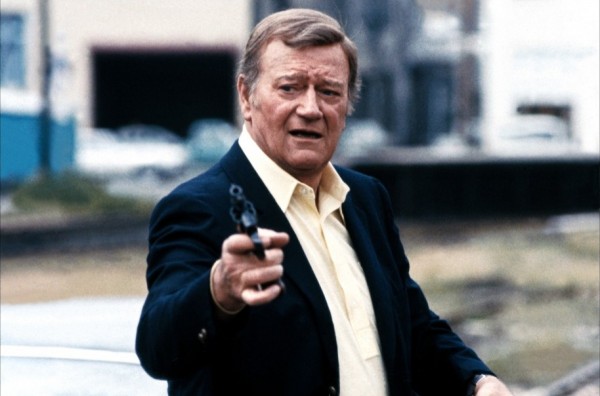 Brannigan is an entertaining John Wayne film but not one of his best; it has some choice one-liners and watching The Duke punching bad guys makes it worth it.

Review: John Wayne stars in this derivative but entertaining cop movie with Wayne playing Jim Brannigan, who is basically a cowboy taken out of his element and dumped in London, England.

The clash of cultures does make for a few funny lines especially “you’re right, you can’t get a decent burger anywhere in this town” and “would you like to try for England’s free dental care or are you going to answer my questions?”

So there are some funny lines and it’s entertaining to see John Wayne butt heads with Richard Attenborough which provides some laughs too. What’s interesting is that although Brannigan doesn’t play by the rules he isn’t cynical like Dirty Harry but is actually quite charming and funny, if a little boorish. John Wayne is always watchable and the bar fight is one of the funniest you’ll ever see with he and Attenborough taking on all comers.

The action is low key but there are some cool car chases and shoot outs and the final showdown between Brannigan and a hitman is profoundly satisfying.

John Vernon’s villain Ben Larkin is a little underused but his story doesn’t go quite the way you’d expect which keeps things interesting and tense.

The music is quite dated and it could have used some editing as a few scenes go on longer than they needed to.

Overall, Brannigan is an entertaining John Wayne film but not one of his best; it has some choice one-liners and watching The Duke punching bad guys makes it worth it.