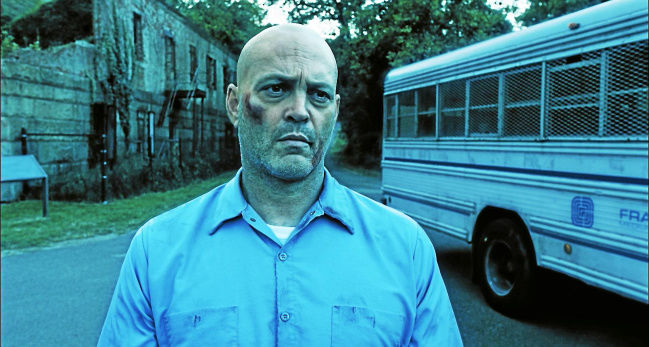 Brawl in Cell Block 99 is a visceral assault on the senses once it gets going but I urge patience as the first hour takes a while for the action to kick in. Vince Vaughn is phenomenal too, making this one of the best movies of the year.

Plot: A former boxer-turned-drug runner lands in a prison battleground after a deal gets deadly.

Review: Brawl in Cell Block 99 stars Vince Vaughn as you’ve never seen him before and he is quite frankly a revelation as Bradley Thomas, a convict forced to perpetrate acts of violence in order to protect his family. At first when I saw his skinhead I thought he was portraying a Neo-Nazi but he didn’t really appear to be and was just a man who was down on his luck with matters only getting worse as a drug deal goes bad and he finds himself locked away from his family for 7 years.

The first hour is painfully (and quite unnecessarily) slow with very little in the way of action. You could have cut a few minutes as it is far too long and it’s not like there’s any great, deep message behind the story. This however, gives us time to get to know Bradley so we can understand why he has to do the awful things he does for the rest of the movie. I urge you to be patient with it as this is from the director of Bone Tomahawk so you know it’s going to get pretty messed up and it doesn’t disappoint on that front.

Brawl is arguably the most violent but also darkly comedic movies you’ll watch this year and I never found it particularly shocking but the violence was more cartoon-like. It almost feels like Punisher: War Zone with heads being crushed and limbs being snapped on a regular basis. So, maybe not the best first date movie but if you find a girl who wants to watch this movie and makes it to the end credits then put a ring on her ASAP.

One of the most brutal moments involves Bradley taking on some other inmates in the prison yard and he beats one of the guys so badly he gets what’s left of his teeth buried in his elbow. You have to be one of those weird people that finds violence funny (like me) to truly appreciate this movie but the story also never really loses heart as we are reminded why Bradley is doing what he does.

Udo Kier is as usual, a creepy bad guy but he has some choice dialogue which he apparently struggled to say as it was quite disturbing for him. He was at our screening last night and did a Q and A afterwards where he talked about the movie and how he had just watched it the night before for the first time and loved it.

Don Johnson is as cool as ever as the take-no-shit warden of Red Leaf prison who has a few good lines of dialogue too.

I’m really becoming a big fan of director S. Craig Zahler as this second movie is arguably even more entertaining than Bone Tomahawk with a cheeky sense of humour so it never gets too dark or depressing.

You can see every punch and kick as the camera relishes the brutality and we’re right there with it cheering; there’s no shaky cam to ruin things so you can sit back and just enjoy the ride.

Overall, Brawl in Cell Block 99 is a visceral assault on the senses once it gets going but I urge patience as the first hour takes a while for the action to kick in. Vince Vaughn is phenomenal too making this one of the best movies I’ve seen this year