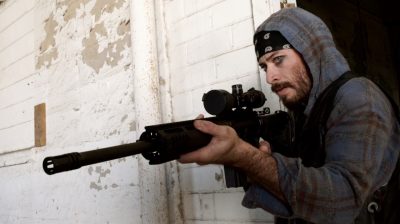 Fuel up on a powerful mix of The Road and Fury Road as Apocalypse Road chronicles the tense journey of two sisters separated during a post-apocalyptic depression. A sweat-inducing story about the instinct of human survival and unbreakable bonds, the film stars Katie Kohler (Subterranea), Ashlyn McEvers (22 Jump Street), Billy Blair (Machete, Machete Kills) and Nellie Sciutto (Shutter Island).

Following a post-apocalyptic event, two sisters are hunted down and separated by a gang of ruthless killers intent on creating their own twisted form of law and order.  The sisters must fight through this new, dangerous world to stay alive in the hopes of being reunited, and escaping to freedom.

Written and directed by Brett Bentman, Apocalypse Road is out now on VOD from Wild Eye Releasing.

The film had a good run at festivals, I believe? Is that how you picked up distribution?

We premiered the film in Austin at the Austin Revolution Film Festival because I had some alumni ties there, I had been playing short films there for a number of years and early on in my career, they supported me, so this was a kind of  “thank you” to the gang down there. Then, we played here in Dallas at the USA Film Festival and that was really fun since we got to play in front of a home crowd so to speak. When it came to distribute the film, we went with the group that offered us the broadest umbrella. My goal when making a film isn’t to play at festivals, it’s to show my work to the masses and we got lucky to have two distributors that get that.

Has it always been a dream to do action thrillers like this?

I am a drama guy. I like to write drama, I like to film it, but in realty drama has a hard time selling. It will always be my first love but the thriller genre has turned out to be fun for us!

Where did the inspiration come from?

I had just come off a horrible experience shooting a western called KREEP, starring Judd Nelson. It was a tough four weeks in west Texas and I literally watched my story, my vision be run down by these producers who knew so very little about making a good film. When I came home from that experience, I took a long time to think and came to the conclusion that it can’t be that way. I quickly started on AR and it came to life so fast. We picked our producers more carefully and filmed where and when we wanted to, with the actors we wanted. It was awesome.

How long did it take to get up?

We shot for several months and we edited the film in sequences to save on budget. Overall, with the score, probably 6-9 months. Which is really quick at the budget we had. That’s when you know you have a special team behind you, when you have your movie out that fast. It means everyone behind the scenes believes in it.

What kind of locations?

So the film is post-apocalyptic, so all the locations, with the exception of one, was abandoned. It was a beast finding them so we reached out the Dallas Film Commission and they helped secure a few for us.

How did you go about casting?

I knew who I wanted for the Sarah and Natalie. We didn’t even have auditions for them. I just met with Ashlyn and Katie and discussed where I wanted these characters to end up. For the others, I had worked with most of them on various projects and always kept them in mind. We are a loyal team here, we want our friends to succeed and it makes me happy I can present them with a film like this.

Did most of the cast do their own stunts?

Yes! Everyone was super cool. We would plan out the stunt work and the actors were right in there.

Do you have a favorite action movie?

I am a fan of anything Denny V touches. He sets the tone so well. I also enjoy a film like Only God Forgives or Drive. Dry with spurts of gore. I am weird. I like it all.