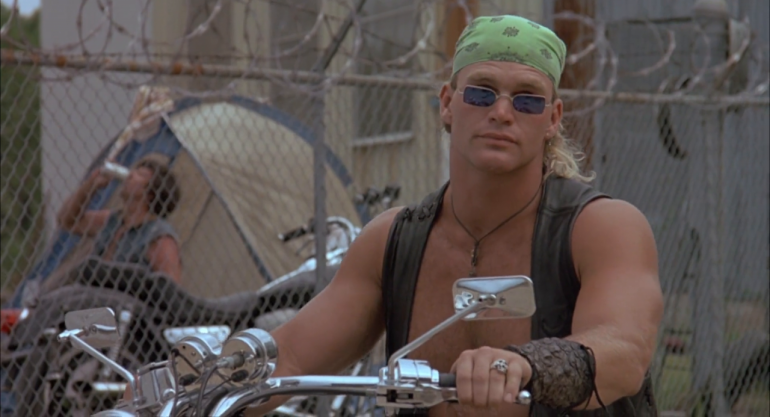 During the 90’s two of my go-to action movies were Stone Cold and One Tough Bastard (One Man’s Justice I believe it’s called in North America).

I really liked Brian Bosworth on-screen as he came across as strangely vulnerable and yet you still wouldn’t want to spill his pint.

I was always disappointed that he never went on to bigger, better movies as he had the chops to be an action star.

He did go on to do other films like the buddy movie Back in Business, Mach 2 (which was pretty decent) and Virus (which wasn’t) as well as Adam Sandler’s The Longest Yard amongst others.

Recently he starred in Revelation Road: The Beginning of the End and Revelation Road 2: The Sea of Glass and Fire but none of them captured the attention of action fans like Stone Cold and One Tough Bastard.

If ever there’s someone who deserves a shot in a future Expendables movie it’s him. I just want to see him kicking some ass again on screen.

In fact, how about a Stone Cold 2? Joe Huff/John Stone comes out of retirement after his daughter is kidnapped blah blah, he snaps necks and saves the day. I don’t care what the story is I just want to see The Boz bringing the pain to some bad guys again.

I think we can all agree that Stone Cold was his best movie with a cast that included William Forsythe and Lance Henriksen; I need to watch it every few months almost like a drug and I think I may have a problem.

Brian was also my first ever interview for this site way back in 2011 I believe; he came across as a nice chap and I want to see him in more action movies again.

On that note I leave you with The Boz vs.Tom Magee from action classic Stone Cold.