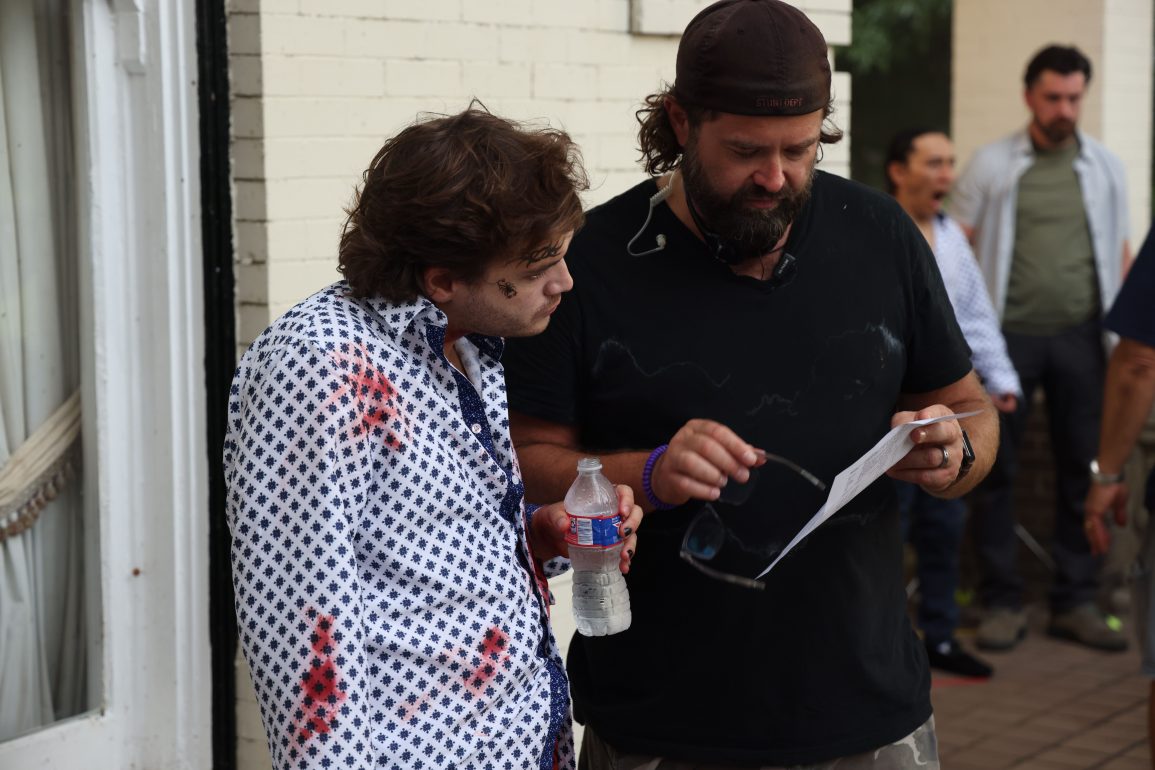 When I last chatted with director Brian Skiba it was for his action picture The 2nd starring Ryan Phillipe and Casper Van Dien; I recently got to chat with Brian again about his latest picture entitled Pursuit starring Emile Hirsch and John Cusack.

SYNOPSIS: John Cusack (Grosse Pointe Blank) and Emile Hirsch (Into the Wild) star in this action-thriller about a tough cop’s hunt for an even tougher criminal. Calloway (Hirsch), a ruthless hacker, is desperate to find his wife – who’s been kidnapped by a drug cartel – when he crosses paths with Detective Breslin. But after Calloway escapes police custody, Breslin joins forces with a no-nonsense female cop to reclaim his prisoner. But is Calloway’s crime-boss father (Cusack) somehow involved in this explosive situation?

Today we’re going to be talking about your latest film, Pursuit. How did the concept initially come about?

The concept came from producer Andrew Stevens. Andrew was the producer of The Walking Tall series. He had come to me and said, “Hey man, I’ve got my partners, Alan and Don Bernstein. We have a script. We just saw The 2nd and we’d like to put you in the driver’s seat”. They sent me the script, and I immediately identified with some aspects of that first draft so we went into a directors draft and they had some producer notes and we just kind of combined everything and then came up with the story that we have. Then John Cusack came on board and John is very hands on; he loves to tell stories and so he came in and he and I went through the script and really honed it down. So it was a good process and good people. 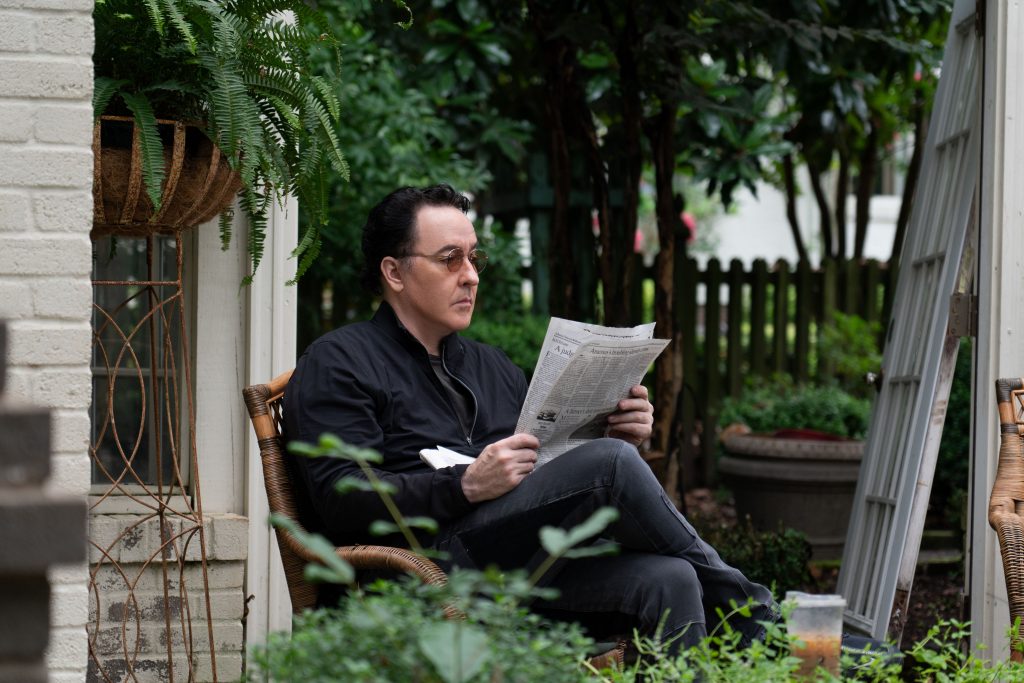 John Cusack always seems very enigmatic; he’s not somebody I know much about. What’s he like just as a person?

John is actually kind of like a guy’s guy. He’s very intelligent, watches sports and keeps up on things. He and I went out to dinner a couple of times when we were in Arkansas filming and just enjoyed each other’s company. He’s just a relaxed kind of person.

People would come out and be like, “Aren’t you John Cusack?” and he’d be very kind to them. I enjoyed him as a as a person. He really is a down to earth guy.

Yeah. Following on from that why was Emile Hirsch the right choice for Rick Calloway?

I really feel like Emile is a character actor where we need to give him some more of these roles. Emile just comes in, he brings a lot to the table, he really does his homework and he likes to build characters. I think a lot of times he gets stuck into these ‘Into the Wild’ type roles that don’t allow him to build a character. It’s just relying on his natural ability to act where if you give him an opportunity to be like, “OK, this is this guy; it’s Rick Calloway. He suffers from alexithymia where he can’t feel emotions.” He calls me after three or four days of studying and has this voice and he wants a face tattoo and things like this. It was really nice to have somebody that really developed a character, it wasn’t just “I’m going to show up with my suitcase and show up on set and here I am!” So he knew the backstory, he knew the type of disability, he really did his research and that’s Emile’s strengths right there.

I love the look of Rick with the facial tattoos. So that wasn’t in the initial script? That was him that came up with that?

So initially in the script, he did have tattoos, but nothing on his face. Emile came to me and said, “Hey, I really think I should have a tattoo on my face” and I was like, “really?” and so we messed around with some ideas on the type of tattoo and placement and things like that. Then we see where it went so it’s always interesting with an actor putting stuff on their face; some actors you could beat the shit out of them and they want very little blood, it’s like, “you can’t mess with me” but I like to. For Emile it was about realism where he’s like “it’s OK to be ugly, man sometimes it’s okay to be ugly.”

I love when he says to John Cusack at the end “You’re kind of a dick”.

Yeah! For me, that moment had a little controversy with it because it was a moment for those two to be together and finally maybe have a moment of resolution and I was like, You know what? John’s character as Emile’s father, he was that type of father that was out there to help Emile even though Emile didn’t really want the help and he knew better. It was like John Calloway is going to help Rick Calloway because Rick doesn’t really know better at this point. He doesn’t know what he’s talking about. He has a disability. So as his father John thinks “I’m going to teach him the hard lesson and then do the hard stuff but in the end eventually, Rick will understand”. But in the end, Rick still doesn’t understand and I think that’s very true to life. We had heard multiple lines to John from Emile but that’s the one that I fought for and eventually stuck with because it really tells a true story where sometimes kids don’t appreciate. I have children; they don’t always appreciate the hard lessons and I think that’s very true of Emile’s character. It was, “yeah, you might have saved me, dad, but you’re kind of a dick”.

How did you work with the composers in creating the score for the movie?

We had two different parties score the film. We have Richard Patrick of the band Filter so Richard came in and laid in some specific pieces and we said “here’s what we’re going for”. Towards the end of the film there is a great piece in there that he wrote. So we’ve got a couple of handfuls of his score. Then Andrew has a standing deal with The Worst. If you look at The Worst, they’ve scored so much stuff and The Worst are more of a traditional type. That’s what they do for a living. They score movies. I felt like it was an opportunity for Rich, who’s scoring more and more. He was getting involved into that type of thing for an opportunity for us to work together. Anytime you can put somebody from Filter or Nine Inch Nails fame and put their music in a movie, I’m all for it.

I really like the explosion in the bathroom scene; it’s such a shocking moment. Can you talk us through putting that together?

Yeah, I feel like what I wanted to do with the action in the film is have those moments that gripped; it wasn’t like there’s no holds barred. It’s one of those moments where it was gritty, it was real, it was violent and it just hits you. You don’t expect it. The bathroom scene funnily enough featured my wife; She plays that character and it was a great death scene. It was shocking. It was violent. I wanted something that people would walk away having seen memorable action. I think with that scene and then the grenade and the classic walk away with the building exploding we did some nice classic elements of action with some meaningful story.

Any movie with explosions is OK in my book.

You can always tell, I find.

Yeah, you can. So everything’s practical, but there might be a couple of muzzle flashes. I think you have to insert for sound reasons or whatever. But I mean, besides that, everything’s practical, all the explosions, squibs and the stunt work. There’s very little CG in the film and we spend all day on set. I had one of the best stunt teams that a guy could ask for. I had the fight designer from Spider-Man, Nick Benson who was a fight designer on Christopher Nolan’s most recent film. Then I had my rigger and all those guys, they were all from The Mandalorian. They just won a bunch of awards. Our stunt team was just outstanding.

It was great to see a return of squibs because I don’t see them as much these days and I love good squibs in my action movies.

Yeah, when you talk to producers and you say squibs, they see dollar signs (laughs) and they go, “wait a minute, I got to get a fire marshal, I got to get this and that.” No, we’ll do it all. CG has really softened the genre. I feel like the fun of what was action in the 80s and 90s was that you were watching somebody actually do it. There was somebody actually on top of a car and the car was really driving down the street and there’s something to that as opposed to a car that has an LED screen behind it.  Because it’s a feat, you’re watching something that’s a feat taking place, and it’s real and I feel like that always translates better.

Yes, the whole point of action movies is to be thrilled by the action rather than thinking that looks like a video game.

You’ve filmed a whole bunch of films since I last spoke to you. How have you found filming during this whole period?

Yeah, I call it my day job (laughs), my day job is TV feature films. I do a lot of thrillers. I think I did a Hallmark movie in there too somewhere, but just to pay the bills. It’s where I really got started. I did Blood Moon Rising and then I did a thriller and then I got into TV movies and they’re consistent. They pay the bills and it’s been a nice kind of training ground as I grew as a director and now I’ve started getting into the bigger action pieces. Hopefully I can phase out those TV films and just start sticking mainly to the bigger action pieces. My next film is a Lionsgate biopic set in the late seventies. It’s a thriller. It’s dark, it’s gritty, it’s like Seven. So I’m excited to be making that nice transition.

What would you like audiences to take away from Pursuit?

I really feel like there’s stories of family in there. I feel like there’s things that people can walk away from it and think people still love each other, people still have conviction, even though they might have problems. In the end, even though John Cusack was a bad guy, he’s a drug dealing kind of monstrous guy, he still loved his son. I don’t think there’s black and white, more there’s the shades of grey. Obviously, there are people that are just bad, bad. I think in Pursuit and in the world that most of us live in, you have people that are always good with people that are always bad. In the end there’s one thing that we do all have in common and that’s love for one another. You find a wife/significant other/husband or whatever it may be that you identify with, and you fall in love and then you’re willing to do whatever it takes for that person and those are strong feelings. Hopefully people can identify with that and at the end of the film, they hug their significant other and go “man, that was a lot of fun and I appreciate you.”

Thanks so much for chatting with me, and good luck with Pursuit.

I appreciate it. Thanks for having me on again.