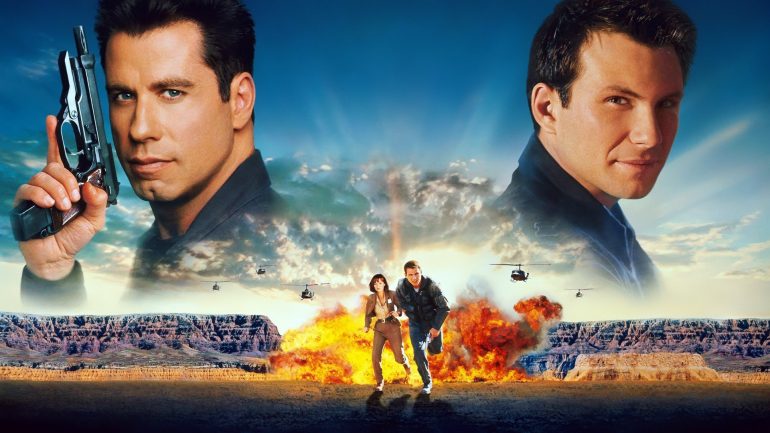 Broken Arrow may not be perfect but it has some spectacular action and John Travolta is at his campy best as the scene stealing villain. Hans Zimmer’s score is one of the best of the 90’s too.

Plot: Terrorists steal nuclear warheads from the US military but don’t count on a pilot and park ranger spoiling their plans.

Review: I’ve always felt like Broken Arrow doesn’t get enough love from people; sure, its not as good as say Hard Boiled but it’s still one of my favourite English language John Woo movies.

John Travolta chews the scenery and is clearly having an absolute blast as Vic Deakins, former US Air Force pilot turned terrorist loon; he also has one of the most ridiculously over the top and awesome bad guy deaths of all time.

The movie opens with a nicely done friendly boxing match between Hale (Slater) and Deakins establishing them as good friends but with an underlying rivalry. It doesn’t take long for the two men to become enemies when Vic decides to steal some nuclear weapons and threaten the USA.

Slater doesn’t entirely convince as an action hero but I find his character appealing anyway and he has nice chemistry with Samantha Mathis who he co-starred with in Pump Up the Volume a few years before this.

Hans Zimmer provides one of his greatest scores to this movie with some nice twanging guitar from Duane Eddie; I love how any time Travolta is on screen he has this hilarious guitar theme tune which is cool, but funny at the same time.

Broken Arrow has Woo’s trademark slow motion and double gun-play galore never lacking in style or thrills. The action is spectacular with the finale on the train proving genuinely explosive; the goons getting a “haircut” is a definite highlight but Hale and Deakin’s final punch up is satisfying.

Overall, Broken Arrow may not be up there with Hard Boiled but for sheer explosive entertainment you could do a lot worse. I love the movie and could watch it on repeat and the music score remains one of my personal favourites.