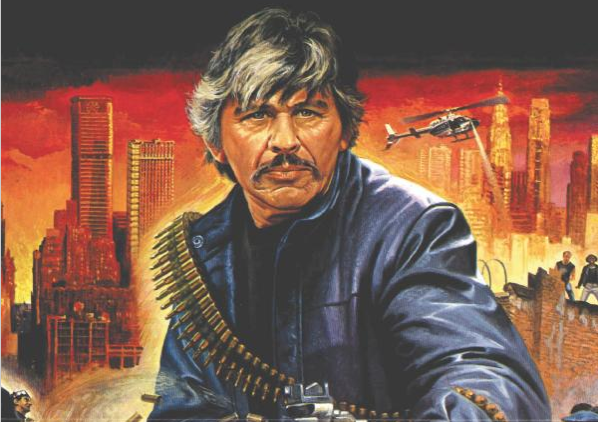 If you’re a fan of the Death Wish series or Bronson in general then this is essential. My only gripe is that it’s a little short, but that’s a good thing as you won’t be able to put it down.

Synopsis: In the summer of 1974 the movie Death Wish stunned audiences with its powerful story of an enraged businessman who hits the streets with a handgun to avenge the brutal violation of his wife and daughter. The film packed theaters with cheering moviegoers, became one of the highest-grossing and most controversial movies of the year, and turned star Charles Bronson into the hottest screen icon in the world.

Over the next twenty years, four increasingly-violent sequels delivered thrills to a growing legion of fans and solidified the legend of Charles Bronson.

Now, for the first time, Death Wish fanatics, Bronson cultists, and action movie lovers will discover fascinating information about the series. In exclusive comments, director Michael Winner, actor Kevyn Major Howard, novelist Brian Garfield, and many others reveal what it was like to work on the Death Wish movies with one of the most charismatic and elusive stars of all time.

Review: If there’s one thing that is just an indisputable fact, it’s that Charles Bronson rules. The Death Wish series is his most iconic with Paul Kersey becoming a classic vigilante.

Bronson’s Loose!: The Making of the Death Wish Films is a fascinating, if brief look behind the scenes of the movies written in an impartial fashion by Paul Talbot.

I personally love all of the Death Wish films but Talbot clearly has mixed feelings about the sequels; understandable as they do essentially descend in to parody but I still just love Part 3.

We find out that Charles Bronson himself wasn’t a huge fan of the series and was really just in it for the money.

Director Michael Winner is interviewed throughout the book giving interesting stories into certain scenes and how they had to cut so much material from it.

Apparently the rape scene in Part 2 was going to be even more brutal but they were forced to edit it down, which isn’t a bad thing as it’s the most disturbing scene of the series.

The sequels would go through several writers and directors with several unused plot ideas, including a sixth movie in the franchise.

Before Cannon films went bankrupt, thee were plans for a 6th movie entitled Death Wish: The New Vigilante but no one was interested in financing the project after the commercial and critical failure of Part V.

Paul Talbot clearly spent a lot of time and trouble interviewing cast and crew to bring us these fascinating stories and if you’re a fan of the series or Bronson in general then this is essential. My only gripe is that it’s a little short, but that’s a good thing as you won’t be able to put it down.