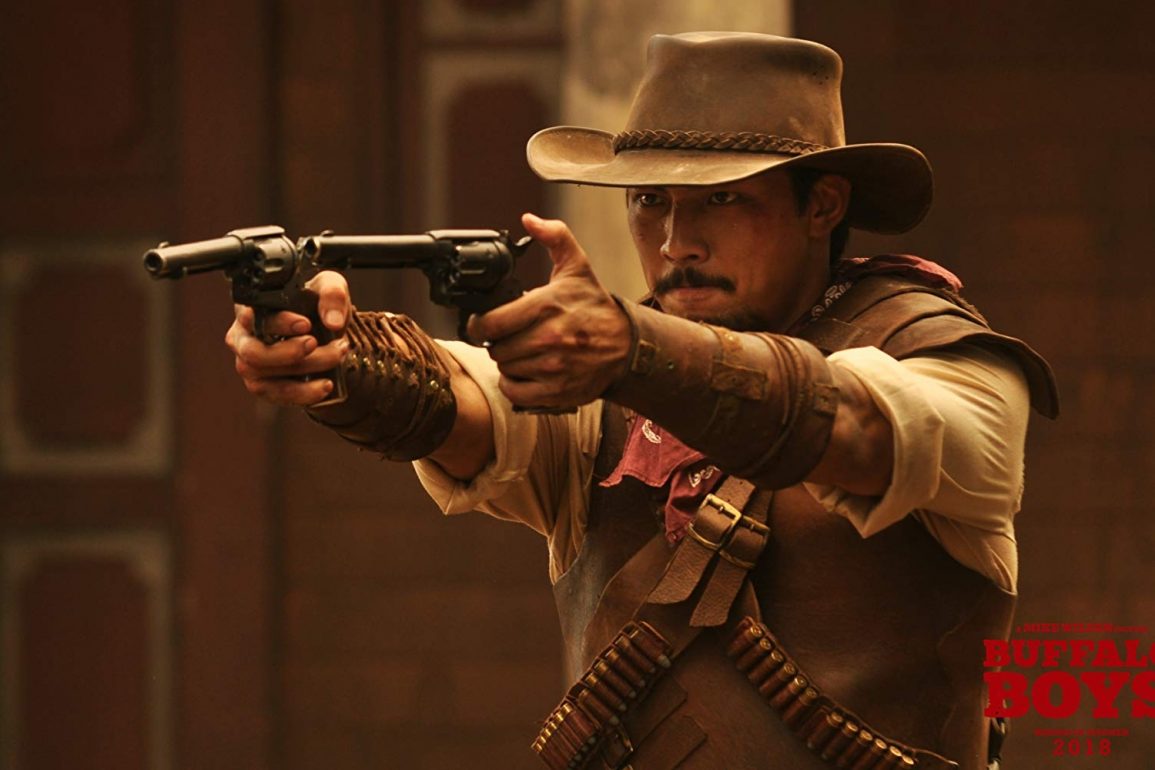 Buffalo Boys has two very charismatic leads who are immediately appealing and Van Trach is a hateful villain but aside from one awesome bar fight and the final 20 minutes the action is otherwise rather forgettable.

Plot: In 19th-century Java, a brutal massacre and the murder of Sultan Hamza by Captain Van Trach and his Dutch soldiers force Arana, Jamar and Suwo — the sultan’s brother and infant sons — to flee the country, bringing them halfway around the world to the American Wild West. After working the railroads and learning the cowboy way of life, Arana tells the boys it’s time to return to their homeland and avenge their father’s death.

Review: Buffalo Boys had been sitting in my Netflix queue for a while so this weekend seemed like as good as any to sit down and finally give it a watch.

If you go in expecting a movie like The Night Comes for Us or The Raid then you’ll disappointed as this isn’t a martial arts movie but really more of an Eastern (rather than Western). The heroes of this tale are brothers Jamar and Suwo who come back from America and embark on a mission of revenge with their uncle Arana.

Along the way they come across a woman being attacked by a group of men and are brought back to their village for food and shelter. They discover that they have a common enemy and Van Trach is the man behind everyone’s hardship in the region.

At this point you’re probably thinking there’s going to be some serious ass-kicking… then you keep waiting while the brothers stand on the sidelines while various atrocities happen… and they still do nothing. I found it a rather frustrating watch and although I thought the story flowed well our two heroes just don’t kick as much ass as I wanted.

Van Trach is one of the nastiest villains I’ve seen for a while and Reinout Bussemaker played him perfectly even if he ended up being more of a pantomime villain. He has no redeeming qualities whatsoever as he beats, rapes and kills anyone in his way including his own staff so at times this can be a tough watch.

The final 20 minutes make it worth the wait (nearly) as the boys take on Van Trach and his goons but by the end of it I felt unsatisfied; personally I wanted a massive final fight with Van Trach being torn to pieces as that’s what he deserved so it was rather anti-climactic. The bar fight was the action highlight for me as Suwo goes in to recover the skull of an old lady’s murdered son which ended up being surprisingly moving.

An unexpected element about Buffalo Boys was the heart; yes, it may not be action packed but you genuinely cared for the characters and I was emotionally invested in the tale.

The two brothers and Arana are sympathetic so we are behind them all the way but it is frustrating that so much nastiness has to happen before they actually do something.

It’s nicely shot and the action is for the most part very stylish but is let down by CG blood which really needs to be outlawed.

I liked the Western style score which obviously had some references to Morricone with cool twanging guitars that set the tone.

Overall, Buffalo Boys is a diverting if not spectacular watch with two charismatic leads and a boo hiss villain and a relatively satisfying finale. I wanted more in terms of action but it is open for a sequel so I would welcome the return of these brothers so we can see them really take out the trash.