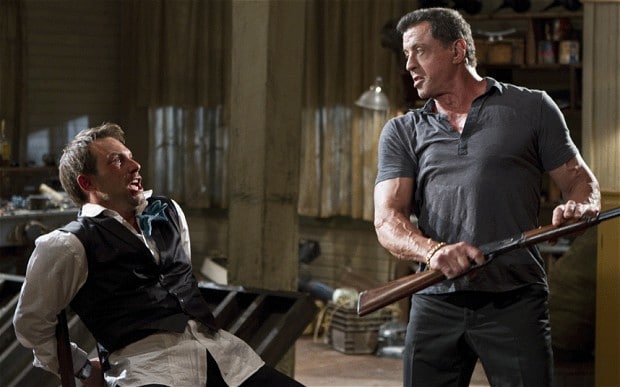 Bullet to the Head is Stallone at his best with some great fight scenes, good one-liners and a fantastic music score. It’s just a shame the supporting cast were a bit underdeveloped.

Plot: After watching their respective partners die, a New Orleans hitman and a Washington D.C. detective form an alliance in order to bring down their common enemy.

Review: Well the snow finally stopped and I got to see Bullet to the Head, after everyone else has already reviewed it. But better late than never. So did it live up to my lofty expectations? Pretty much. It was an awesome movie and Stallone has never been more badass. Jimmy Bobo is one of his best ever characters who is tough as nails and just as ruthless.

The film doesn’t skimp on hardcore violence and nudity either which also goes in its favour. Stallone has some choice one-liners in it and he’s rarely been better. He can still show anyone how to do action, with bone-crunching fight scenes and a really intimidating screen presence. You would not want to mess with this character.

Walter Hill once again proves why he is one of the greatest action movie directors of all time with action you can actually see; so there’s no shaky cam, lens flare or any of the other crap that plagues today’s action movies. It reminds me of classic Hill like 48 Hrs. or Extreme Prejudice where the characters are all tough as nails and if you’re weak, you’re dead.

It doesn’t pull any punches and is the kind of movie I absolutely adore; I’d love to see more of its kind in this day and age.

I also liked how it isn’t a typical buddy movie where they become best friends by the end; these are two very different guys with different beliefs and that worked well.

Jason Momoa proves he’s got the muscle and the screen presence to become a huge action star and he is one mean sumbitch in this movie. He is sadly a little underused and it would have worked better if he was the main bad guy and was more developed.

One of the best scenes was the party with lots of naked chicks serving drinks which made me think, has anyone EVER been to a party like that? I sure haven’t, but by God I want to!

The music is one of the best action movie scores of recent times; it’s got cool electric guitar and a nice bluesy sound to it. It isn’t Walter Hill’s go-to-guy Ry Cooder this time but Steve Mazzaro who manages to follow in Cooder’s footsteps with confidence, making the score essential.

The movie isn’t perfect though as I found that Sung Kang was a bit bland and I found myself wondering what Thomas Jane would have done if he had been given the part that he was originally meant to have. Kang didn’t have much to do in it and his character was more of an annoyance than anything; he doesn’t even have a final fight scene. It’s very much Stallone’s movie so Kang is more on the sidelines. Stallone is also the only character who has any decent lines as a lot of the script is a bit flat and unmemorable.

It also isn’t exactly an adrenaline rush with a bit of a slow first half with very little action. I never looked at my watch though, which is always a good sign.

Overall, Bullet to the Head is Stallone at his best with some great fight scenes, good one-liners and a fantastic music score. It’s just a shame the supporting cast were a bit underdeveloped.