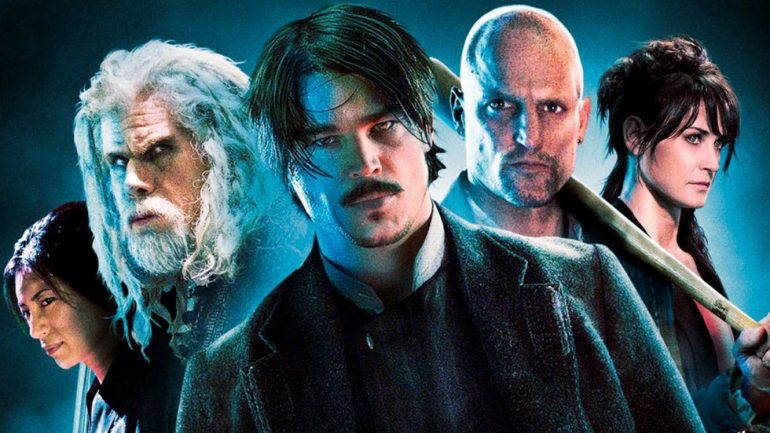 Bunraku is certainly an acquired taste and not for everyone but I was blown away by the original visuals, cool characters and jaw-dropping fight scenes.

Plot: The story of a a young man who has spent his life searching for revenge only to find himself up against a bigger challenge than he originally bargained for.

Review: I picked this up for 3 bucks on Blu-ray in my local dollar store last week; purely for the cast alone I thought I’d check it out. As soon as the movie started I knew I was watching something I hadn’t really seen before.

I wasn’t sure if it was going to be my cup of tea as it was really quite surreal, but I gave it a shot and ended up thoroughly enjoying it.

Bunraku is a form of traditional Japanese puppet theatre which explains the bizarre visual style of the film, where it’s almost like a comic/pop-up book brought to life.

Once you get used to the unique visuals you can really appreciate the sheer effort that went into bringing Bunraku to life.

The martial arts scenes are fantastic and the characters are all memorable. The cast includes Josh Harnett, Ron Perlman, Demi Moore and Woody Harrelson so you know we’re going to get first rate performances. Josh Hartnett steals the movie as the mysterious drifter who comes into town looking for revenge. He’s unbelievably cool in it and his character is also a complete badass.

Gackt plays a warrior called Yoshi who is out to retrieve a medallion which was taken from his family. The Drifter and the swordsman reluctantly team up and we are given a movie which splices several genres together successfully. It’s martial arts, sci-fi, comedy and fantasy and for the most part it works really well.

Kevin McKidd and Ron Perlman are first rate villains and you’ll be throwing stuff at the screen while watching them.

I love that it’s something different and the sheer imagination on display should be lauded. Director Guy Moshe hasn’t done much since as Bunraku didn’t exactly light up the box office, which is a shame as he’s an incredible visual filmmaker who wasn’t afraid to take a risk with a project like this.

It’s not perfect though; it’s far too long and could have been edited a little. I also thought the narration wasn’t really necessary. It was fine to establish this world at the beginning but the guy kept providing commentary throughout the story and it wasn’t required.

Overall, Bunraku is certainly an acquired taste and not for everyone but I was blown away by the original visuals, cool characters and jaw-dropping fight scenes. For 3 bucks, you can’t go wrong so if you see it then pick it up and prepare for something a little different.