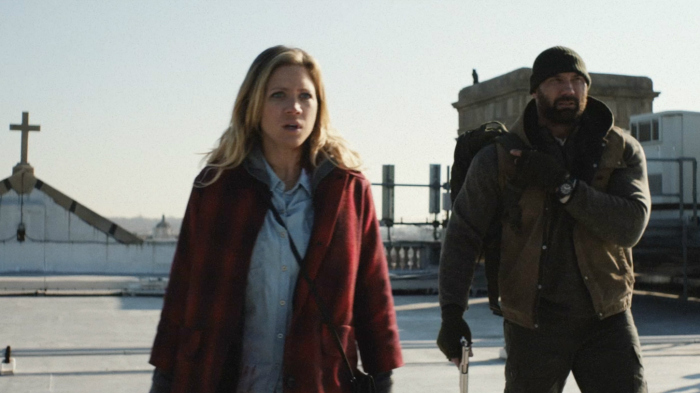 Bushwick is a hard edged action thriller which doesn’t skimp on tension or violence so you’ll be on the edge of your seat throughout.

Plot: When a military force invades their Brooklyn neighborhood, 20-year-old Lucy and war veteran Stupe must depend on each other to survive.

Review: Bushwick is one of the most intense action movies I’ve seen this year with a very timely premise: what happens when America has the next Civil War? When Donald Trump got into power there were rumblings of various States saying they wanted to secede which is the basic idea behind this movie.

It starts off with our heroine Lucy (Brittany Snow) stepping off the subway and her local neighbourhood is under siege by unknown assailants. While getting chased by some thugs Lucy seeks shelter in a basement and is saved by Stupe (Dave Bautista) so the two of them team up to try and survive.

This is the perfect example of how you use sound when on a limited budget. Most of the movie you are hearing explosions and shoot-outs while our heroes are trapped in a building and it sounds like all Hell is breaking loose outside. It creates a feeling of utter terror and helplessness as you don’t know where is safe and who can be trusted.

Normally when watching a film like this you’d be thinking that something like this would never happen but with everything that has gone on (including 9/11) anything is possible. With tensions so high in the US right now it wouldn’t surprise me if there was some kind of insurgency.

Dave Bautista was born to be an action hero and his wrestler’s frame is perfect for the character of Stupe, a gentle giant of a man who wants to get to Hoboken to be with his wife and kid. He is immediately likable but believably badass and you know he could take care of himself in this kind of situation. Stupe’s monologue at the end is one of Bautista’s best acting moments to date and is surprisingly moving; he’s never been better.

I really liked Brittany Snow as Lucy who starts off as utterly petrified (as you would be) not knowing what is going on but transforms into a real survivor but never stretching credibility.

There is some CG but nothing too bad and it maintains the tension for the most part; the majority of the film is apparently done in a single shot which actually really worked in getting you into the story so you feel like you are right there with them.

The action ranges from running and shooting, to hiding and a couple of brief fist fights keeping things exciting and intense.

It’s quite a nihilistic tale and doesn’t offer any easy answers, essentially leaving you with nothing but that’s one of the reasons why I liked it.

Overall, Bushwick is a hard edged action thriller which doesn’t skimp on tension or violence so you’ll be on the edge of your seat throughout. Definitely worth a watch.