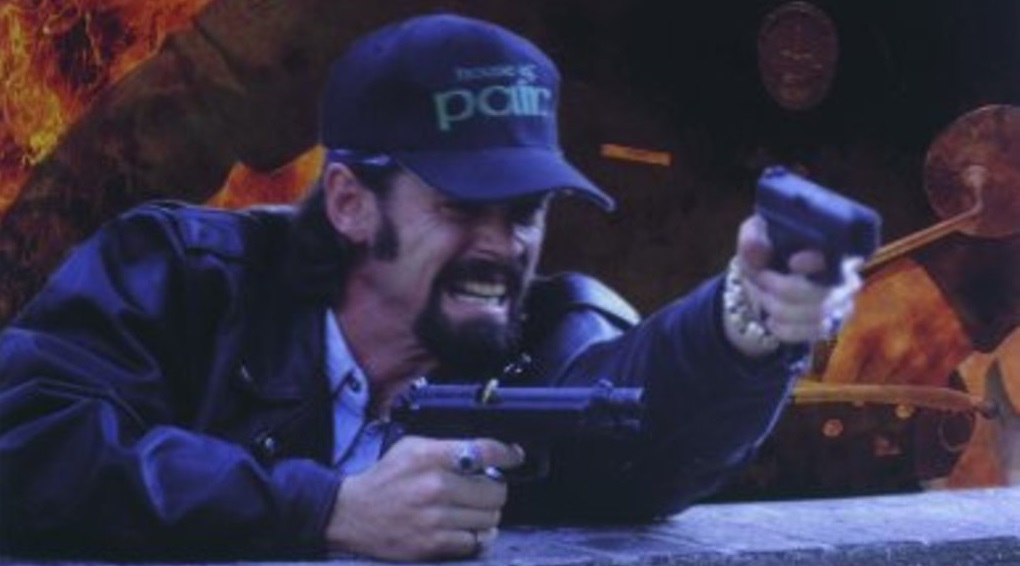 Plot: A young renegade undercover cop (C. Thomas Howell) with a propensity for violence and a past history involving the murder of his cop father (Jeff Fahey) and the remainder of his family is recruited by a vigilante group with a leader (Ed Lauter) who wants only to kill all criminals and those associated with them.

You always know when you see the PM Entertainment logo at the start of a movie that you are about to see some real action and The Sweeper doesn’t disappoint. It starts off making you think that Jeff Fahey is going to be our lead protagonist but then he’s shockingly killed off in the first 10 minutes but that’s not before an epic car chase around Los Angeles (of which there are several in this movie). Our real protagonist is his son Mark (played by C. Thomas Howell) who is admittedly far less interesting than Jeff Fahey who I consider one of the coolest men alive.

Anyway, despite being advised by his dad’s partner as a kid that he should become a dentist Mark follows his father’s footsteps and becomes a cop. He also has a penchant for getting into trouble with 9 kills under his belt so he is approached by a mysterious organization called The JI led by Molls (Ed Lauter). The organization are essentially killers for hire who take out bad guys but it never really goes into that much detail.

At one point Mark is working with his new female partner and while they’re waiting to go to work she asks if he wants to make love. I can count on one hand the amount of times this has happened in my life. It’s always “who are you? Why are you in my house? I’m calling the cops!” women…

There’s a chase about halfway through the movie which includes a conveniently placed trucks with gas canisters in it… best be careful they might expl– too late. An awesome bad guy death ensues…

There’s also a bad guy who has about 4 minutes of screentime and he runs some other organization which also isn’t really explored that much. All that matters is that Mark finds out that Molls and his organization are the real bad guys so he has to go into one man army mode at the end and take them out.

The biggest surprise about The Sweeper is that we ever actually find out about the people who killed Mark’s dad; it’s left unanswered which was profoundly unsatisfying as I wanted to see that guy get his comeuppance but it did add some realism to it where not every villain gets caught.

Don’t go into this movie looking for much in the way of logic or memorable dialogue but if you’re looking for absolutely spectacular action scenes then this is a must-see. The car chases are some of the best of the 90’s and the freeway sequence in the finale is frankly jaw dropping. There are some amazing stunts in this movie with real (huge) explosions the like of which we rarely see today and the movie generally holds up well. It’s got the same plot as Extreme Justice with Lou Diamond Phillips but this has more spectacular action and is sillier but still a lot of fun.

Joseph Mehri never disappoints when it comes to kick ass action and The Sweeper once again delivers the goods; check it out if you can find it.