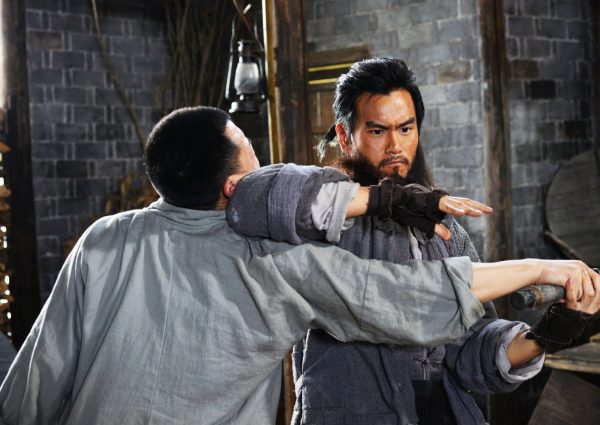 Call of Heroes is a high quality old-school martial arts actioner with memorable characters and plenty of action.

Plot: The soldiers from a village seek vengeance after a warlord kills innocent people while they are away.

Review: After Operation Mekong I thought I would catch up on Call of Heroes which in my opinion is the superior film. Feeling in part like an old-school Shaw Brothers film Call of Heroes has plenty of martial arts action and a particularly hateful villain in Louis Koo. If someone announced that they were going to cast him as The Joker one day I wouldn’t have a problem with it as that’s essentially who he is in this movie.

After being captured by the guardians of a small outpost, that has thus far avoided any problems from a vicious Warlord his son Cho Siu-lun (Koo) decides to pay a visit where he murders 3 innocents and is arrested and sentenced to be executed.

Before this can be carried out however, the Warlord’s troops arrive led by Cheung Yik (Wu Jing) who says if they hand over the man then the people will be spared. It’s now up to the head guardian Yeung Hak-nan played by the brilliant Sean Lau to struggle with this moral dilemma. Does he free a murderer to save his people or should there be justice no matter what the cost? As he is taunted by Cho Siu-lun (who just laughs and mocks everyone at the outpost as they beg him for mercy) you really want Yeung Hak-nan to just kill Cho, so you 100% understand his quandary.

My favourite character in the whole movie though is Eddie Peng’s Ma Fung who is a mysterious drifter who tries to convince everyone how tough he is despite the fact he can’t help saving people. The action highlight is his climactic fight with Wu Jing, which although marred by a lot of CG vases it is still impressive.

Like Operation Mekong Call of Heroes doesn’t skimp on the old ultraviolence either and it has a pretty huge bodycount with a few moments that shock. Watching Cho Siu-lun finally getting what he deserves is incredibly satisfying and had me punching the air with delight.

Overall, Call of Heroes is a high quality old-school martial arts actioner with memorable characters and plenty of action. You will also despise the villain so much you’ll barely contain yourself. Yes, there is some CG which has no place in a movie like this but aside from that this is a hugely entertaining film.