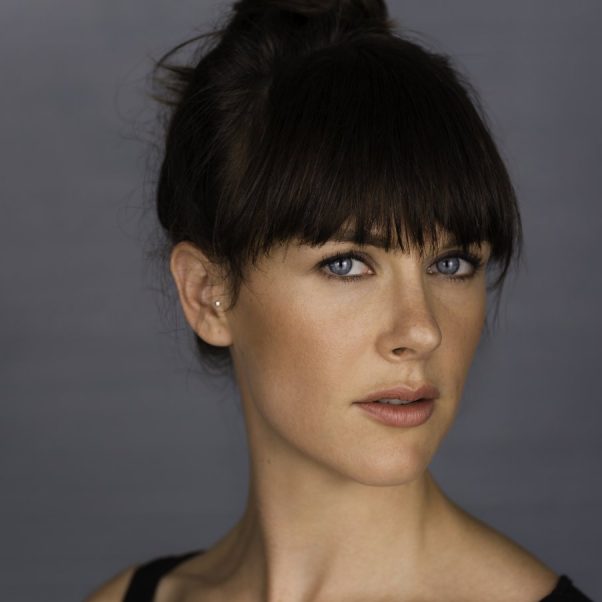 Carolina Bartczak was born in Germany to Polish parents before immigrating to Canada. She studied biochemistry at the University of Toronto and arts at the Université De Lyon before moving on to acting.

She has a little movie out this weekend called X-Men: Apocalypse. You might heave heard of it.

In the movie Carolina plays Magda the wife of legendary villain Magneto.

She stops by The Action Elite to talk about the movie and the transition from biochemistry to acting.

You started off studying biochemistry and worked as a travel writer; what made you want to become an actor?

I think I was always interested in the same way that people are always interested in becoming rock stars when they’re 15 so there was always definitely a desire for it. I decided I wanted try out working in film and television and I worked for a production so I was looking to get auditions all day and I was like “these people are having way more fun that I am and I don’t like it!”

So I signed up for a theatre school and once I’d done that I thought there was no turning back now. I was coming from a biochemistry background so when I got to theatre school everyone knew about theatre and the different types of acting and all that stuff. So I was just like a pig in shit (laughs); I don’t know a better way to say I was so excited about a whole new world with this whole different perspective of how to look at the world. I studied evolutionary biology so I studied behaviour so getting to study behaviour from a humanistic point was a dream come true.

Surely that must have been a good crossover with the X-Men with your studying of humans and evolution?

Well not so much but she’s a very, very interesting character; she and Magneto have very different views of humanity. Magneto has gone through this terrible, terrible life where he’s constantly dealing with prejudice and his parents are killed which makes him feel responsible. Naturally he has a very dark vision of humanity and he sees how fear drives humanity whereas Magda has a very different perspective that inherently people are good. That’s basically the argument between Magda and Erik which ends up being her downfall and that she was wrong.

Did you see any of your own personality in her?

I think in a sense because I believe people are good and I always think people will understand and once they understand they won’t be scared anymore. Then sometimes I flip to the Magneto/Erik side that people can be really dangerous if they’re afraid and will act out in ways you can’t predict. I definitely saw myself in her; I think I ended up being cast in it because she’s a warm, generous, good partner and mother. I’m really complimenting myself here (laughs). There’s a warmth and a strength there which I played to. Here I am complimenting myself again (laughs).

Did you read any X-Men comics beforehand?

I did read the comics and I also did some research online but there isn’t a lot of information on Magda. Also as soon as I got the script I saw that they had deviated from the original description and history of Magda. So I had to put the comics aside as I was afraid that might influence how I would end up playing the character considering they were not going in that direction. I took all my cues from the script; I spoke to the writer and me and Michael filled in a lot of the blanks as to who she was and how their relationship was.

How did you prepare for the role?

I’m going to be honest and say I didn’t have a lot of time. I found out that I got the part on April 1st and was told “just relax; we’re not shooting you until mid-summer”. So I thought “perfect, I’ll just enjoy reading it”. Then they started shooting on April 21st and called me on April 22nd and said “just kidding we’ve moved your shoot date to tomorrow”. My heart dropped out of my body and I fell into complete panic. I was shooting within 2 days so I had to do all my work in 48 hours.

Do you enjoy the challenge of things happening unexpectedly like that or do you prefer having the extra time?

I like having the extra time because I think the only way you can truly let yourself be a character for me, as I see it is once you have the words memorized so deeply in your body that you don’t have to think about them if at impulse then the words of the character will come out. For me, I prefer a lot more time so I can soak up those words. Because I come from a background in biochemistry I’ve been trying to figure out how memorizing works and pretty much the key is to sleep. After you do your work and sleep, that’s when the neuropathways for the words get formed. So if you’re stressed out and not sleeping it is much harder to keep those words inside your mind, especially if you’re nervous. If you get on set and as soon as you get nervous and pressure starts coming into your body, the words are the first thing to go. That’s always a big challenge; I’m not a big fan of cramming and like to take my time and just really soak everything up.

What do you look for in a character when you receive a script?

Some writers are really great at writing conflicting morals in a character; those are the best. I mean that’s what Magneto is; two aspects of his personality are constantly fighting each other. Whether to live a peaceful life or whether to crush humanity, because he’s so angry. Is he going to let love or anger dictate his life? That’s what I have to see in a character; are there two conversations happening within that human being? When you see someone’s struggle that’s what’s interesting. You’re not interested in the result of Erik or Magneto; you just want to see what decisions he makes and why.

I’ve always been more of a Magneto supporter personally…

Yeah there’s no such thing as someone who is all evil unless it’s like a cartoon villain who is going to rob a bank and destroy the world. No human being exists like that. It’s always someone who is conflicted between two ideas and one of those ideas trumps the other.

If you were to have a superpower, what would it be?

You’re based in Canada, would you ever considering moving full time to LA?

Yeah, I think that the opportunity has to be there; it’s a hard market and a hard industry in general so to move to a city where there are so many actors and they are vying for the same thing. I would go once I felt as though as I was established enough to work consistently.

You’ve worked on big movies like X-Men and Brick Mansions to smaller independent movies and TV shows; do you have a preference?

No, I just love to work; I mean TV is really cool because it moves really quickly so you fly through things. But it’s also longer formats now so you can have 10 episodes to develop a character. Whereas in film it moves a lot slower and it feels like adult camp because you get to be with a group of people for 3 months or 3 weeks and can get to know people very well. So there are definitely benefits to working in both.

Right now I’m working on a few of my own projects; I just finished producing a film called Fox Trouble and I’m just shopping it to festivals and obviously I’d love to get it in TIFF. Then I’m also trying to get a feature off the ground so we’ll see how that goes. I’m sure it’s not that hard… right?

X-Men: Apocalypse is in theatres now.