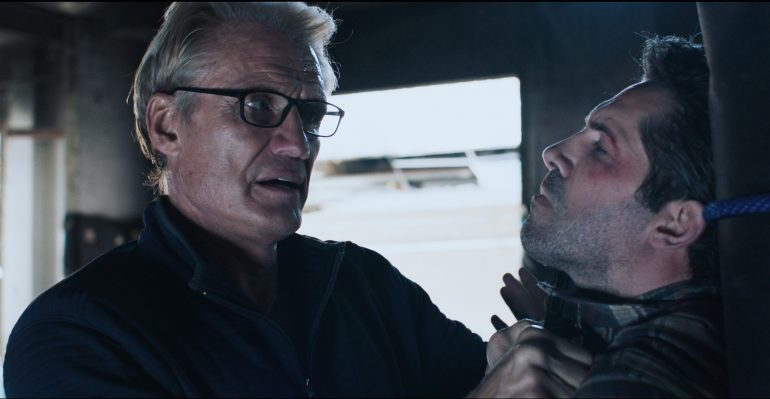 Castle Falls may lack the budget to be remarkable but both Dolph Lundgren and Scott Adkins give strong (and moving) performances providing us with impressive fight scenes and shoot-outs that deliver the action goods.

Plot: After decades of neglect, Castle Heights Hospital, this symbol of the city’s segregated past has been packed with dynamite and is ready to be demolished. No one knows that a gang leader, now in prison, hid the 3 million dollars in cash he stole from his rivals inside the abandoned building. Now, three desperate parties want the money – a blue collared ex-fighter (Adkins) who finds it while working as part of the demolition crew, a prison guard (Lundgren) willing to do anything to pay for his daughter’s cancer treatment and a ruthless gang who claim to be the rightful owners. The demolition charges are set, everyone clears out and the Castle is set to fall in 90 minutes. The clock is ticking. Who will find the cash and: will they get out alive?

Review: In case you’re wondering why I haven’t reviewed One Shot starring Scott Adkins yet I never got a screener for it (must’ve got lost in the mail) and the film isn’t out here until January so I’ll maybe review it then.

Until then Scott’s latest picture is entitled Castle Falls which is directed by Dolph Lundgren who also stars alongside Adkins.

Castle Falls was filmed during Covid and it’s a miracle that the film came out as well as it did as it sounded like it must have been a nightmare having to do Covid tests every day and make sure protocols are in place.

You can tell Castle Falls didn’t have a huge budget as it lacks a certain sheen with no big set-pieces but it does have plentiful fistfights and shoot-outs which will keep genre fans entertained.

Dolph Lundgren gives one of the best performances of his career as a father called Richard Ericson who works in a prison and discovers one of the inmates has hidden $3 Million in a hospital which is about to be demolished. Ericson isn’t going after the money out of greed and is just trying to save his daughter’s life as she is ill with cancer. There is a scene where he breaks down sobbing in the car which is genuinely heart wrenching. Dolph’s real daughter Ida plays Emily and although it’s not a huge role she gives a wonderful performance.

Scott also gets to shine as an aging fighter whose best days are behind him and he is at rock bottom desperately needing money. This is an interesting angle especially if you look at action stars or fighters whose selling point is their physical prowess so what happens when your body starts to let you down and you have to face the grim reality that you’re not the fit specimen you once were? In the case of Mike Wade (Adkins) he is forced to move out of his apartment and live in his car eventually finding a job with a demolition company to help take down the old hospital.

Both our lead characters are sympathetic, and we are on their side throughout hoping they will succeed as they are dealing with very real problems we can all identify with.

The villains are suitably hateful and we get some satisfying beatdowns and a high bodycount delivering exactly what you’d expect from a movie such as this.

After the opening fight in a gym it does take a little while before the real action kicks in but its setting up the characters and story so we understand the stakes. The second half of the movie is definitely the superior with more action and the fight scenes are well choreographed so we can see everything that’s happening.

Overall, Castle Falls takes a while for the real action to kick in but it’s worth the wait and both Adkins and Lundgren give surprisingly emotional performances while providing regular beatdowns and shoot-outs to keep fans engaged.