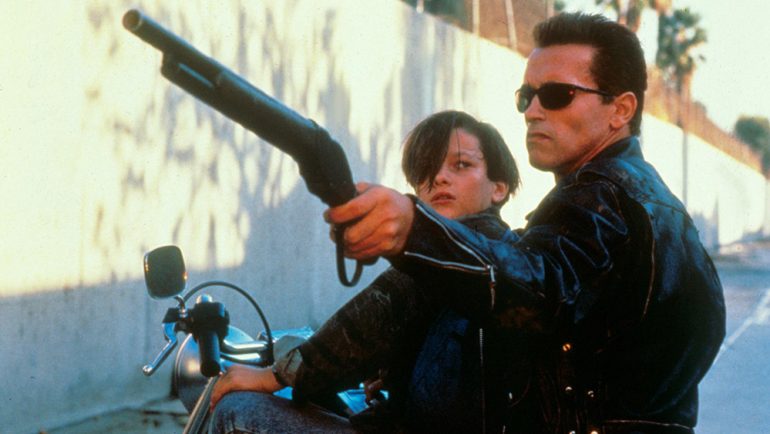 I can say without a word of a lie that Terminator 2: Judgment Day is arguably my all-time favourite film. Today is the 25th anniversary of the movie so I thought I would give a tip of my hat to James Cameron’s masterpiece.

In a piece of not very interesting trivia, I actually saw it before I saw the first Terminator. It was amazing that I knew what was going on but I picked it up and fell in love with the movie from my first viewing. Obviously I immediately bought the VHS of The Terminator and got up to speed on the story and characters.

I saw T2 5 times on the big screen and to this day the opening scene is still one of the all-time greatest.

I was blown away by the future war sequences as they created a hellish vision of the future with Brad Fiedel’s industrial (and sad) music score helping to create this world.

I never understood why the other Terminator sequels failed to capture the feeling of impending doom and sense of threat that the first two movies had but that’s now pretty obvious, they weren’t made by James Cameron. He understood the characters and the story because he created all of it; this was his world and despite the other sequels being entertaining this will always be the best one. They also never used Brad Fiedel’s main theme; I remember when I saw Salvation for the first time and thinking “What is this crap music? Where is the Terminator theme?”

Linda Hamilton was a revelation in this movie; in The Terminator she is a waitress totally out of her depth with no idea of the future that awaits her. When she meets Kyle Reese (Michael Biehn in career best form) he tells her that her unborn son will be the future saviour of mankind when the machines take over. She quickly finds out this is true and Terminators are real so her life is changed forever and the meek waitress becomes a warrior woman. Her transformation from the first movie to part 2 deserved more praise and frankly should have won Hamilton an Oscar.

Arnold Schwarzenegger was never known to be a great actor but even he was perfect in the first two Terminator movies making you actually believe he was a futuristic cyborg who tries to learn what it is to be human. “I know now why you cry, but it is something I can never do”. *wipes away tear*

The one person who became a star from this movie was Robert Patrick who played the T-1000; his catlike features are apparently why Cameron cast him in the role as the liquid metal Terminator who is nearly unstoppable.

The action is still incredible with so many classic scenes but the T-800 (Arnie) shooting all the police cars with a mini-gun without killing anyone and then the building exploding is definitely way up there (see below).

I can’t believe the movie has reached 25 years old but it still holds up well and will always remain a classic of the genre.