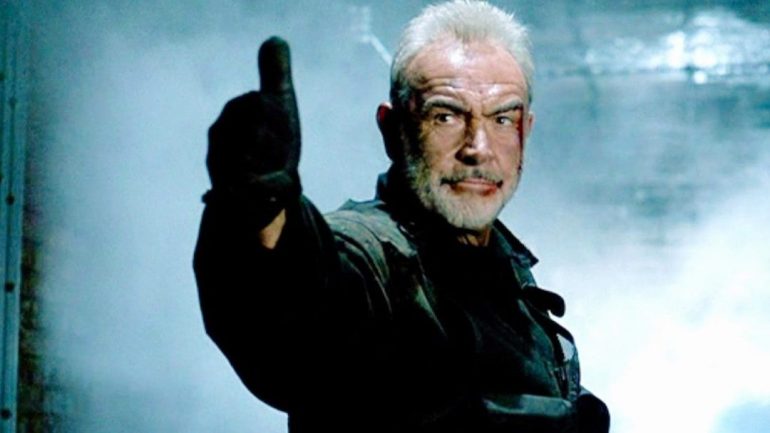 Plot: FBI chemical warfare expert Stanley Goodspeed (Nicolas Cage) is sent on an urgent mission with a former British spy, John Patrick Mason (Sean Connery), to stop Gen. Francis X. Hummel (Ed Harris) from launching chemical weapons on Alcatraz Island into San Francisco. Gen. Hummel demands $100 million in war reparations to be paid to the families of slain servicemen who died on covert operations. After their SEAL team is wiped out, Stanley and John deal with the soldiers on their own.

I’m still having a hard time believing that Michael Bay’s The Rock is 25 years old this week as I remember watching it in the theatre like it was yesterday.

This was during Nic Cage’s golden action movie period where he made The Rock, Con Air and Face/Off which to this day are all cracking action films.

In my opinion The Rock remains Michael Bay’s finest hour and although he has made several good movies since like 13 Hours this is a near perfect action movie.

The script is sharp and at times hilarious with Connery at his gruff best (“personally General sir, I think you’re a fucking idiot”) and Cage being well… Cage but he is still ideally cast as Goodspeed.

Ed Harris never disappoints, and his troubled General Hummel is layered and interesting; he isn’t an evil man but just misguided and he realizes before the end. Harris seemed to be a little method as I remember watching some behind the scenes footage on the Criterion Blu-ray and he came across as incredibly intense.

Considering the movie has a rather long runtime of 2 hours and 16 minutes it never drags giving the story and characters time to breathe; it also provides us plenty of action including an epic car chase through San Francisco and regular spectacular explosions.

Hans Zimmer provided what I consider one of the all-time great music scores with a memorable theme that works perfectly in building up tension and excitement. The 90’s were my favourite era for Zimmer as he also did Broken Arrow, True Romance, The Fan and Crimson Tide which all had amazing scores.

I was reading on EW that the film was going over budget and Michael Bay was nervous about asking the Disney execs for more money so Connery asked if he needed help. So they all sat down for lunch and Connery stated “This boy is doing a good job, and you’re living in your Disney Fucking Ivory Tower and we need more fucking money!!’ Without missing a beat, they responded. ‘OK.  How much?'” Atta boy, Sean.

I have seen some fun fan theories that The Rock is actually a James Bond movie where Mason is in fact 007; I don’t necessarily agree with some of the ideas but it’s entertaining nonetheless.

Overall, The Rock is still a classic action movie after 25 years with a cast at the top of their game, a tight script and some jaw dropping spectacle.