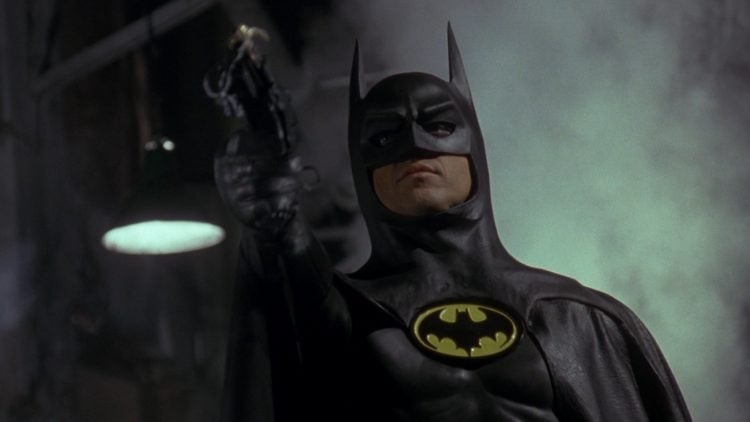 Plot: The Dark Knight of Gotham City begins his war on crime with his first major enemy being the clownishly homicidal Joker.

I don’t think I’ve ever been as familiar with a Superhero film than I am with Tim Burton’s Batman. I have watched it so many times that I could quote every line; this month Batman turns 30 so now that I am back from vacation (and rather jet-lagged) I thought I would do a quick piece to pay tribute.

Upon watching Batman recently it still stands up really well and feels like a comic book come to life; despite protestation from comic fans at the time Michael Keaton was perfect as Bruce Wayne/Batman and I still love his enigmatic turn as the iconic character. I love how the mystique still surrounds Batman and Bruce Wayne in the movie; Wayne is eccentric and weird and Batman is monosyllabic and possibly psychotic. We don’t get too much backstory and Keaton plays Wayne as someone you can never really get close to but also never really know what he is thinking.

The Batman voice is the best we’ve had yet and is so simple but effective; I also think Keaton’s Batsuit is my favourite too although Batfleck’s from BvS was also awesome.

Jack Nicholson was ideally cast as The Joker and just personified the character completely.Was he over the top? Yes, but he’s The Joker; he’s meant to be that way. Fans have complained that the history was changed with The Joker (Jack Napier) killing Bruce Wayne’s parents and that also Batman wouldn’t kill people. This is certainly a very valid argument for purists but it doesn’t take away my enjoyment of the film.

There is a great supporting cast including Kim Basinger as Vicki Vale, Michael Gough as Alfred and Billy Dee Williams as Harvey Dent. I would’ve loved to have seen what he would have done if we got to see him become Two-Face.

Danny Eflman’s score to this film remains the greatest superhero score of all time alongside John William’s Superman; it’s darkly heroic and I know every track off by heart. Hans Zimmer’s Dark Knight music was cool but it never really captured a memorable theme so this remains my personal favourite.

The film has some surreal moments and a stunning visual aesthetic which really adds to the creation of this world; the Joker’s “girlfriend” Alicia Hunt wearing the porcelain mask still sticks in my head after watching and freaked me out as a kid.

Although admittedly some of it looks like a film set, that’s what I like about it; it feels like an alternate universe where these bizarre characters could exist and I get swept away by it every time.

The finale involving the Batwing flying over Gotham is wonderful and once again the music is fantastic; it’s too bad the Joker got killed off at the end as it would have been great to see Jack return to the role at a later date.

After 30 years Batman remains one of my favourite movies with great performances, stunning music and great set design; it may stray from the comics but it essentially created the superhero genre we see today.