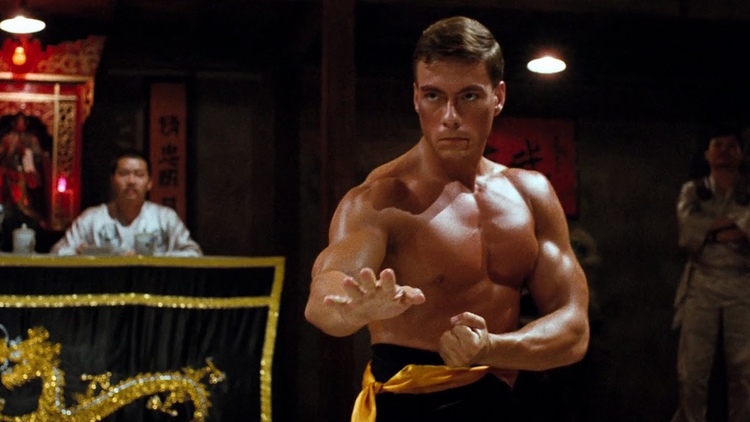 It was February 26, 1988 when Bloodsport starring JCVD was released and a star was born. Based on an (allegedly) true story from Frank Dux, it tells the story of how he fought in an underground fighting tournament called “The Kumite”.

To this day, it remains a classic martial arts film and one of JCVD’s finest hours. Sure, most of the acting is dodgy in places and there are some hilarious facial expressions, but for sheer entertainment value and spectacular martial arts fight scenes, Bloodsport is just plain awesome.

I love Donald Gibb as Ray Jackson in this movie; his introduction on the bus where you think he is going to be a sort of bully character really wrong foots you as he ends up becoming Frank’s best friend. I particularly like this scene as Ray is essentially harassing a girl and you’re expecting him to have a fight with Frank but it never happens. Instead he just smiles and shrugs it off.

The fight scenes in this movie are still some of the best ever captured on film, with participants from all over the world each fighter  has their own style keeping the action exciting and different with every battle.

Bolo Yeung plays the villainous Chong Li, who Dux is forced to battle at the end after nearly paralyzing Ray in an earlier bout. Apart from the aforementioned facial expressions, he’s an intimidating presence on screen and you really wouldn’t want to fight him… because you’d lose. Bolo became pretty much a legend from this movie alone but watching him square off with Van Damme again in Double Impact was a treat for fans.

Bloodsport really brought Tournament style martial arts movies back to the fore in the West and launched a million other wannabes, including three sequels starring Daniel Bernhardt.

The music is very dated by today’s standards and it’s all a bit 80’s but it doesn’t take away from the sheer entertainment value and great pacing of the film.

After 30 years, Bloodsport remains one of the best Western martial arts movies and is essential to any fan of JCVD.