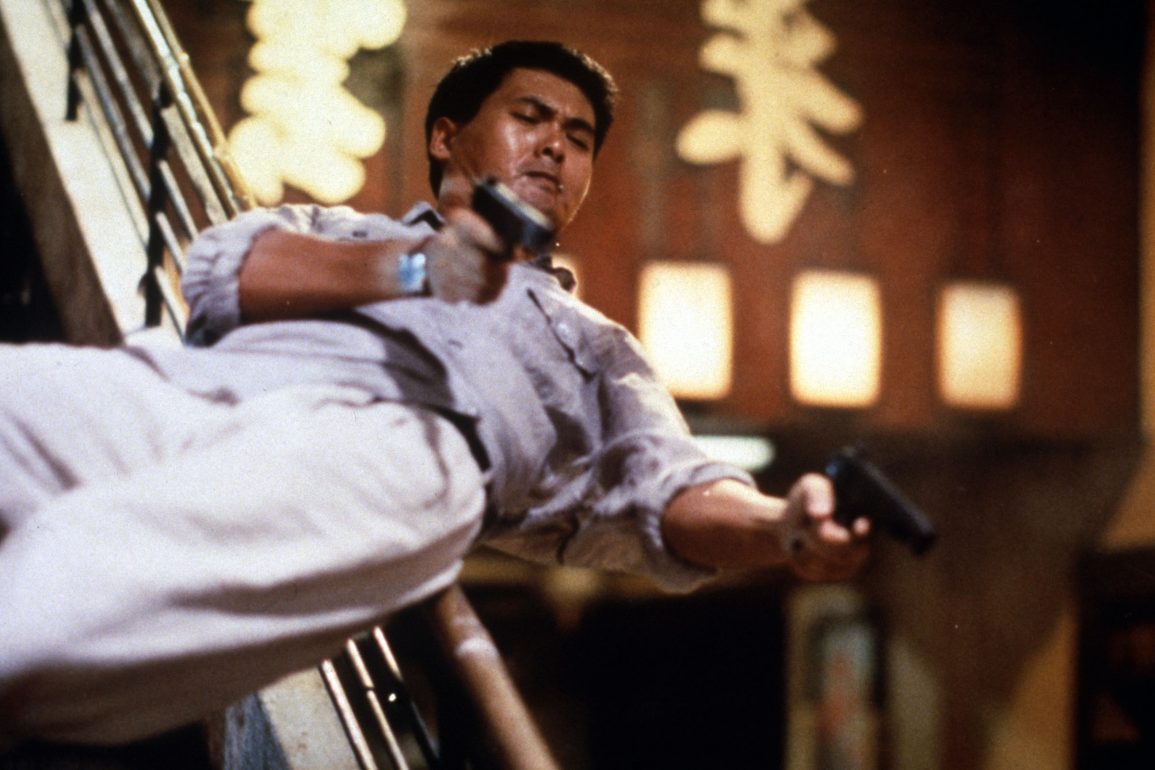 Plot: A cop who loses his partner in a shoot-out with gun smugglers goes on a mission to catch them. In order to get closer to the leaders of the ring he joins forces with an undercover cop who’s working as a gangster hitman. They use all means of excessive force to find them.

This weekend marks the 30th anniversary of John Woo’s action classic Hard Boiled; there are few films which I would say are perfect, but this just might be one of them. The inhumanly cool Chow Yun- fat plays cop “Tequila” Yuen who is obsessed with taking down crime lord Johnny Wong (Anthony Wong) and teams up with undercover cop Alan (Tony Leung) who is struggling with which side of the law he is actually on.

What ensues are 2 hours of some of the greatest action sequences ever committed to celluloid including the opening gun battle in the tea house, featuring Tequila sliding down bannisters while firing two guns (which remains one of the most John Woo moments you’ll ever see); then we get the incredible warehouse battle, a one take shoot-out in a hospital followed by endless explosions and one of the most exciting finales in action cinema history.

Everything about the action in this movie is still mind blowing and it’s true to say they really don’t make them like this anymore. The camera work is faultless letting us see everything happening on screen, the squibs are amazing and there is just a sheer sense of scale especially in the finale when Tequila jumps out of the exploding hospital carrying a baby.

Chow Yun-fat is iconic as Tequila and is one of my favourite movie characters; he doesn’t show much emotion and is caught up in his job, so much so that his girlfriend has been receiving flowers from another man however, things may not be as they seem. Tony Leung’s Alan is more complicated as he is an undercover cop but he has killed a lot of people and begins to lose himself in that world so his moral dilemma gives the film extra depth.

Anthony Wong is scarily unhinged in this film killing anyone in his way and is one of the most underrated villains of the genre. One of the best supporting characters is Mad Dog (Philip Kwok) who is Wong’s loyal henchman but (spoiler alert) towards the end he realizes that his boss is a maniac and ends up getting killed by him.

Sure, it could be argued that the music score is very dated sounding now, but I still love it as it has that late 80’s early 90’s saxophone which adds some sexiness to the balletic carnage.

After 30 years Hard Boiled remains one of the best action films of all time and John Woo’s masterpiece (closely followed by The Killer).  So let’s raise a glass (preferably of tequila) to one of the greats. Happy Birthday, Hard Boiled!