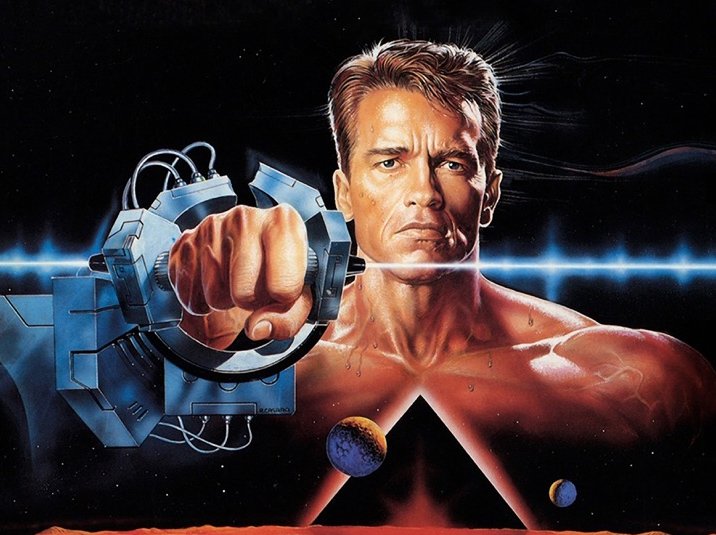 Plot: Douglas Quaid (Arnold Schwarzenegger) is a bored construction worker in the year 2084 who dreams of visiting the colonized Mars. He visits “Rekall,” a company that plants false memories into people’s brains, in order to experience the thrill of Mars without having to travel there. But something goes wrong during the procedure; Quaid discovers that his entire life is actually a false memory and that the people who implanted it in his head now want him dead.

Today marks the 30th anniversary of one of my favourite Arnold Schwarzenegger films – Total Recall. This is easily in my top 5 films of his and it’s a reminder of how much I miss seeing Paul Verhoeven sci-fi films on the big screen.

Arnie plays Douglas Quaid… or is it Hauser? He tries to find the reason behind his recurring dream about Mars but soon learns that a false memory has been planted into his brain and the people responsible for it want him dead.

Total Recall is the ultimate mindfuck and by the time the end credits roll you’ll be questioning reality and wondering if everything is just a dream.

Ronny Cox excels as Cohaagen; a fascist leader who literally charges the people of Mars for air (or “ayuh” to quote Quaid. The original story was written by legendary author Philip K. Dick (Blade Runner) and the movie also has us asking if our reality is indeed that or if it is a construct much like The Matrix. You could look into all these themes and scratch your beard thoughtfully, but this is an action site so let’s keep things straightforward.

Not only is Ronny Cox wonderfully evil as Cohaagen but Michael Ironside is also at his malevolent best as Richter, Cohaagen’s right hand man. Then we have Sharon Stone as Quaid’s “wife” and to this day it remains one of her best roles. She has a spectacular fight with Melena (Rachel Ticotin) who just might be the woman of Quaid’s dreams.

The cast are all at their best and there are so many classic one-liners like “consider that a divorce” and ‘See you at the part, Richter!” but it also has the wonderful swearing old lady which was a staple in some of these movies “fuck you, you asshole!” as Quaid snatches his case from her.

My favourite aspect of the film has always been Jerry Goldsmith’s iconic music score especially the opening credits theme which to this day is one of the all-time great action movie scores.

The action is as hard R as you’d expect from Verhoeven and there are an almost endless number of squibs used. This makes me a bit of a sicko but I love the crunching sound effect of Quaid breaking Harry’s neck; it’s so over the top that it makes me laugh every time.

The pacing is perfect, the story is packed with twists and turns and it even has a mutant with three breasts; what’s not to like?

In terms of flaws although most of the visuals still hold up there are a few dodgy visuals especially in the “get ready for a surprise scene” but that’s really the only niggle I have.

After 30 years Total Recall remains one of the classic action movies and one of Arnold Schwarzenegger’s finest hours.