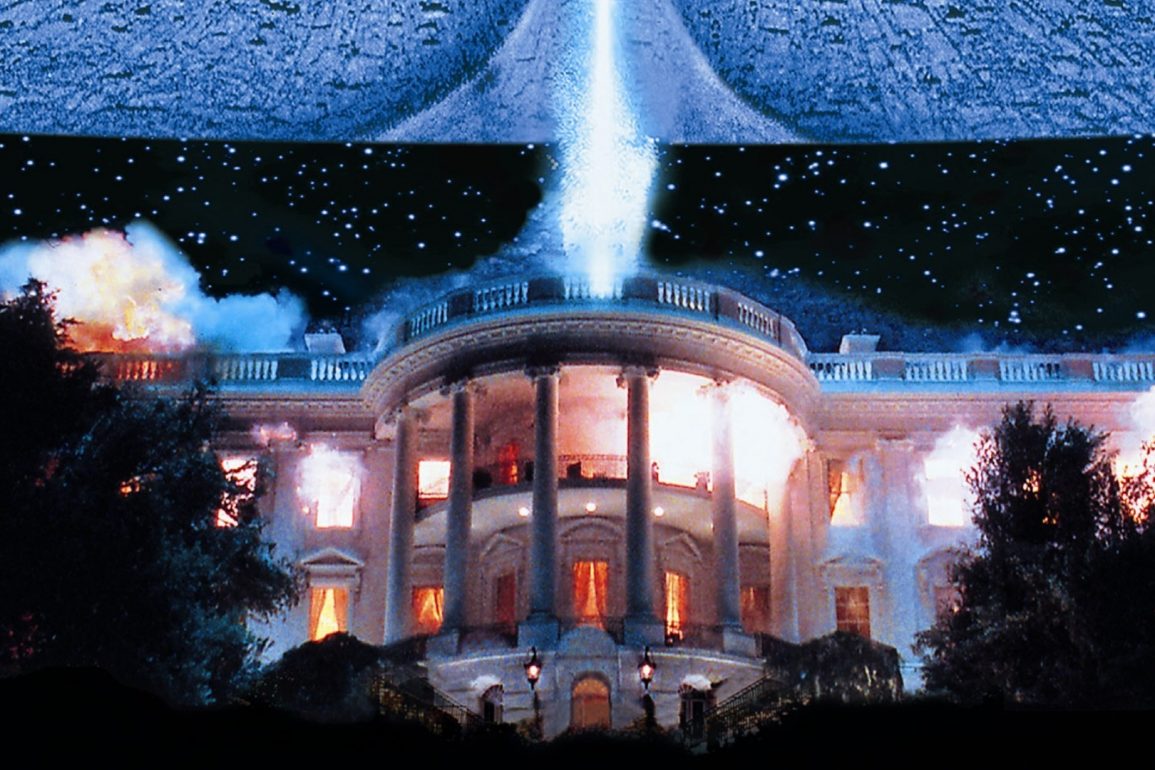 Today is the 4th of July, one of the biggest holidays in the US of A so what better way to celebrate than with Roland Emmerich’s classic Independence Day? I remember when the film was coming out, the hype surrounding it was huge; the trailers were fantastic and anticipation levels were high. It ended up being a huge box office hit and audiences lapped it up, myself included.

Now, I don’t care what anyone says, I love this movie. Yes, there are plenty of flaws which I’ll get to in a second but to this day it remains escapist fun.

The best part of the movie happens around the 40 minute mark when Earth is attacked by our unwelcome new visitors; the visual effects are still fantastic and the initial attack (mostly on New York) still makes my jaw drop. There is such a sense of scale to the action scenes and the build up the the attack is expertly done.

The big problem here is it never really lives up to that amazing sequence afterwards; there are a few aerial dogfights and entertaining scenes but that is definitely the film’s highlight.

As everyone has stated in reviews there are plenty of flaws in logic with the movie too, like how the aliens just so happen to have similar technology to us so we can bring their ships down with computer viruses so this is very much a leave your brain at the door movie.

My biggest peeve with Independence Day however, is Randy Quaid’s “comic relief” character Russell and as with all comic relief it isn’t funny; even at the time I was thinking he was just so annoying and ruins several scenes; I never cared what happened to him or his family but was quite happy with his “noble” sacrifice.

Bill Pullman may come off as too much of a wimp to be President but that is deliberate. In the first half he is seen as weak and inexperienced but by the end he’s a flag waving, world saving, ass kicker who gives the best damn speeches of all-time and can inspire a nation to rise up against insurmountable odds.

David Arnold’s score is jingoistic and exciting and just totally wraps you up in the story; it has a great theme tune which you’ll be whistling for ages after watching.

Will Smith is his usual shouty self and his character is a little annoying after a while, but you still root for him because he’s Will Smith. Jeff Goldblum is the same as always too but like Smith, you just like him anyway. They share some entertaining one-liners and make a good double act.

Independence Day is such great fun, with some amazing action set-pieces and a likable cast who all have their own journeys to go through. It’s flawed, but for me it’s sort of beyond criticism as I love it no matter what.