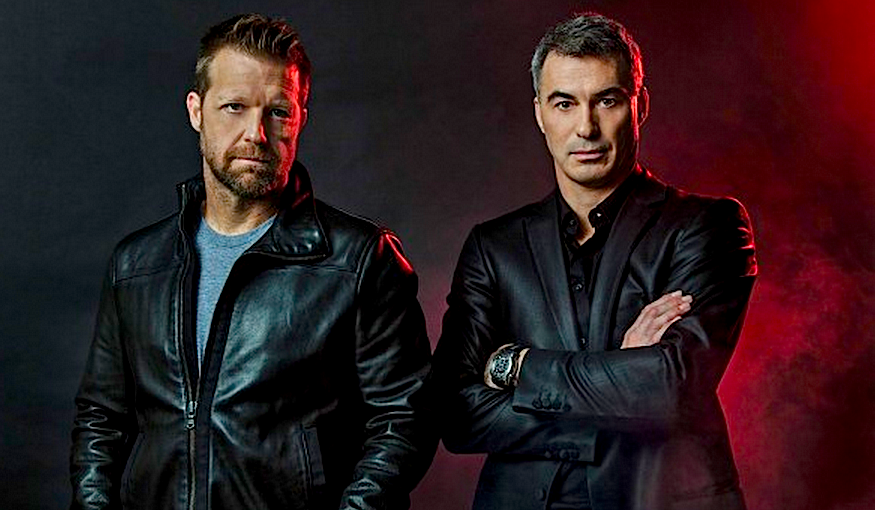 “John Wick Week” continues on The Action Elite and we sat down with the directors of the film Chad Stahelski and David Leitch where we talk about the film. Chad and David come from a background that includes stunt co-ordinating, martial arts and more. They have worked on such movies as The Mechanic, 300, The Matrix Trilogy, Jupiter Ascending, Ninja Assassin and many more.

Congratulations on John Wick, it really is an incredible film and one of my favourite action movies of the past decade.

Thanks so much! What was it that you liked about it?

I loved that it was that rare beast of an R Rated adult-oriented action movie; it had great characters, world-building, awesome action scenes and a fabulous cast. Was it your intent from the start was to create something that grown-ups would be interested in watching?

That was our hope *laughs*. Don’t get us wrong, we don’t mind jumping into different genres and rating levels but this material spoke to us and we are genre fans; we like Hong Kong cinema, Korean cinema, and the old Spaghetti Westerns and Kurosawa movies. They are all hard boiled; they are rated R and it’s hard to do a movie like this and have it not rated R.  From working in the industry for so long you kind of get a vibe on what’s PG-13 and what is R.

Honestly, other than answering other people’s questions we just wanted to make something we thought was cool. It’s not like were saying we have to do this because it’s R! We just did what we do; the material demanded it and we just responded to the script.

There was no way this could have been a PG-13 movie. This has to be Hard Boiled or this would no longer be cool. Keanu brings that hard/soft sensibility to it and John Wick has a softer side; so you can’t go soft on the character and also soft on the movie violence too.

It was great to see Daniel Bernhardt have such a big role in John Wick; he’s been a part of 87 Eleven for a while and I loved his short film Fetch. When you first read the script did you have him in mind as Kirill?

Daniel’s a close personal friend! You know what’s funny? We actually originally offered the role of Kirill to another close friend, Jason Momoa but it didn’t happen due to scheduling conflicts. Daniel was always going to be in this movie; we actually created Kirill because we felt like we needed another big henchman character.

We felt like we needed another stepping stone to create an obstacle between John and Viggo. When Jason expressed interest we kind of blew the part up a little bit and then through the creative process Kirill’s part becomes kind of intricate to keep the story moving at some points. Then when Daniel became involved the action would go to a different level because of his experience. Keanu’s actually worked with him on The Matrix movies so we had a lot more fun with it.

I love how David Patrick Kelly (The Warriors) had a small role; I think I was the only person who cheered when he came on screen…

We cheered when he showed up for an audition! *laughs* we’re like “Why are you auditioning?” and we were just casting for some bit characters. We were doing auditions in this little room in Chinatown, New York and he walked in. I had first met him about 17 years ago on The Crow where I doubled for Brandon Lee. We asked him what he was doing here and he said “I need a job!” and we said “well, you’ve got one!”  He’s just awesome and so is Bernhardt!

This is your directorial debut, what was it about John Wick that made you want it to be the first big feature?

There were a lot of opportunities with that script and it could give us the chance to do something interesting and different. The problem/opportunity with genre movies is they tend to have been told a million times. So we looked at it and there was an old-school sensibility to the dialogue, there was this little bit of an underworld element built up and there’s a minimalist nature to the script that Chad and I were like “Right, it’s like a graphic novel!” so we immediately applied that style to it and everything started to click.

The version of the script we read was very minimal; Derek kept it very clean and precise; there’s a very weird formality to it. You could definitely picture (other than Keanu) Lee Marvin or Charles Bronson; really minimal, just the hard man walking down the hallway kind of thing.

It was quite shocking to read because it wasn’t descriptive like “and the action was like THIS!”, it just sort of played out. So we thought it was super streamlined and it had a great vibe and tone to it. It’s going to be really fun.

I said to Keanu Reeves that I thought The Continental idea was something we had never really seen before. Would you ever consider spin-off movies focusing on the various assassins that hang out there?

I love where your head’s at *laughs* we’ll see; I think there’s fertile ground for a lot of stories in that world and we’re totally up for it. Taking yourself out of the director’s chair and looking at it as an audience member, I’d go ahead and say the same thing “I wanna see more about that!”

So if the audience is interested then so are we…

Does coming from a stunt coordinating background give you an advantage as directors in putting fights together, like the perfect position for cameras etc?

I think doing an action story the way we composed it then yeah; we were super fortunate in our stunt backgrounds. Shooting action is very much in our wheelhouse, so we can ape a lot of different styles depending on what movie we’re on. Directing a movie from beginning to end, you have to have appreciation for music and other departments like art direction.

So you have concerns about lighting, cinematography and art. I think sometimes action guys forget about that stuff but that I think is what makes movies cool. It’s this weird synergistic effect and if you only look at one thing like “The action’s great!” then that can be a problem.

Asian cinema was guilty of that for decades where it was just about the action; less attention was paid to the story, the lighting, etc. So maybe that’s cool for the genre and I’m sure we’re all fans of some of the movies I’m talking about. This also limits the audience that’s going to see it. We wanted to take what they would call a B movie plot and give it an A movie look for relatively a small budget. I think paying attention to those things is a big thing you learn as a director. You cannot slack on lighting or any of those things and action should never be its own entity.

All of that creates an effect with your action; some of the directors we’ve worked with as stunt co-ordinators focus more on character than action and then we don’t care about the action. It works both ways; the good, big budget action directors know that action is just another part of the process like acting and performances. So David’s right that it’s all one big piece of a puzzle and all the pieces are equally important.

The lighting during the club shoot-out was phenomenal; it had a graphic novel feel to it. Can you talk us through setting that up and if you had any influences?

We knew we wanted to heighten the world and we knew we wanted the set-pieces to have different colour palettes. We worked with our director of photography Jonathan Sela who helped us put that together.

In terms of influences there are literally tons but we particularly love the Wachowski’s movies as they are always creating different worlds and their use of colour. Our style is influenced mostly by the old Spaghetti Westerns; in terms of lighting this movie it’s really Jonathan Sela who really enhanced our vision. If he’d say “Ok we’re gonna go colour” then we’d go colour; he’d be coming up with ideas all the time on using primary colours and how good they would look. We’d say “we want this…” and he’d say “Oh you just want this? Well how about THIS?” *laughs*

He would take what we want, flip on its head and times it by ten. He worked on the last Die Hard movie and made it look great.

When we went into this collaboration we laid out what we wanted but they weren’t going to just let us go too crazy.

I really loved how each character was fleshed out and felt different from genre norms, like Michael Nyquist’s character Viggo is actually quite terrified of John Wick.

Yeah! We wanted to take the genre stereotypes and turn them on their heads. Viggo never really does anything… offensive to John but they have all done bad things and that’s where fate kind of comes into it all.

Viggo gives the speech explaining where they are cursed and rewarded for all their misdeeds; he’s sort of accepting his life for what it is and he’s trying to stop it but it’s what’s going to come.

We really want the audience to step back in their heels and say “Wait, what? This is really different!”

I remember when I first saw the trailer everyone was saying “Oh no, not the dog!” and as a dog person I can totally see John’s motivation as I’d destroy anyone who hurt mine.

Thanks very much for chatting with The Action Elite and all the best with the film; I hope it’s a massive hit!