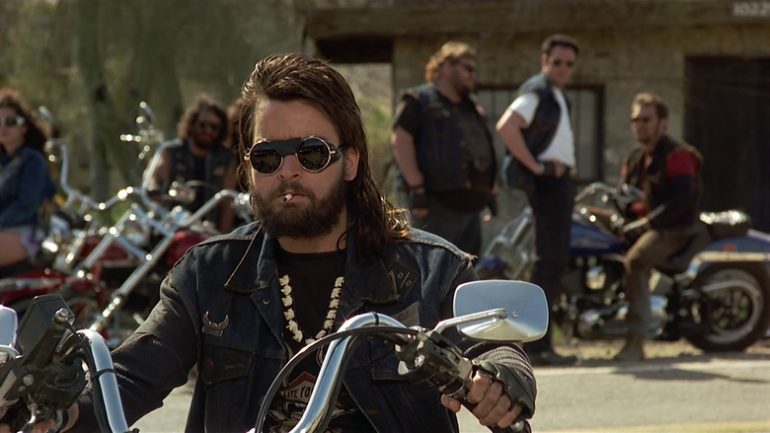 There was a period when Charlie Sheen tried his hand as an action hero with movies like Terminal Velocity, Arrival and this movie Beyond the Law which I thought I hadn’t seen before. I picked it up on VHS last week and wondered why it looked familiar but I always knew it as Fixing the Shadow or Made of Steel so it all got a little confusing.

It’s actually a really fun action flick with Sheen playing a cop called Daniel Saxon who goes undercover in an effort to topple a motorcycle gang whose members deal in illegal weapons and drugs. To prove himself to the gang’s leader, a thug called “Blood” (Michael Madsen), Saxon engages in a series of dangerous acts. Though he takes solace in his burgeoning romance with Renee (Linda Fiorentino), a photographer chronicling the gang’s lifestyle, Saxon finds the line between police work and criminal behavior increasingly blurry.

Sheen overacts a few times in the movie which cause a few moments of unintentional mirth but it gets pretty tense with Madsen as charismatic as ever. It has kind of a Point Break vibe to it where you like the bad guy but by the end you realise he actually is a real villain who needs to be taken down.

You can never go wrong with biker movies and this would be an ideal double bill with the Brian Bosworth classic Stone Cold. Not entirely sure Sheen looks all that convincing or remotely badass with his biker look but that’s part of the fun.

Saxon’s descent into Hell has some interesting visual quirks and there are a few moments which will have you on the edge of your seat.

It’s well paced with plenty of action including several brawls; one of which has Saxon drive his motorbike into a redneck bar which then descends into a massive fight.

Linda Fiorentino was unbelievably sexy during this period and was always great to watch on screen as she could play jaded characters very well while also being very appealing.

Leon Rippy and Rip Torn show up and have a rip roaring good time… (sorry) but they are both always entertaining to watch.

Overall, Beyond the Law is one of Sheen’s better action efforts with Michal Madsen in particularly charismatic form and plenty of action to keep fans happy.