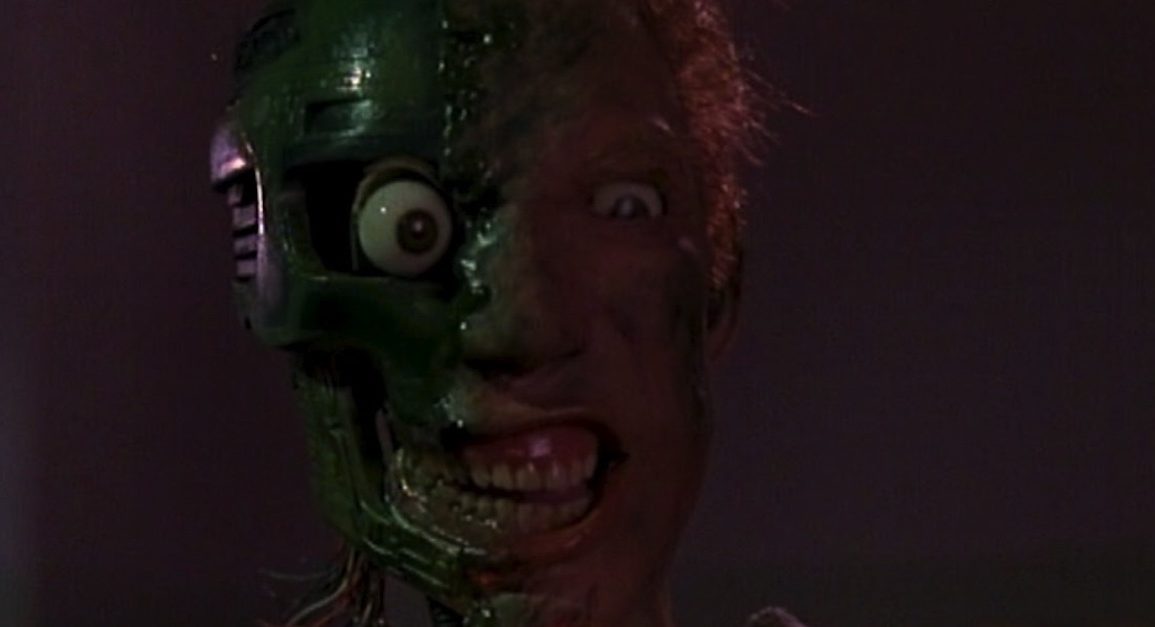 These are two movies that have no right being as entertaining and awesome as they are. Sadly 1999 has long since been and gone and we still don’t have cyborgs teaching in schools which frankly I think is an outrage.

Like I said I love both movies but which is better?

Plot: Robot teachers have been secretly placed in the schools where the students have run riot. The teachers do a good job of controlling the unruly youngsters, until they go too far and some students get suspicious.

Respect must always be due to the late, great John Ryan who always had a knack for looking amused and slightly crazy at the same time. I remember him in Death Wish 4 and Delta Force 2 where he just chewed the scenery.

He does much the same in Class of 1999 as one of the pipe smoking cyborg teachers (never thought I’d write that) who has a penchant for harsh forms of discipline. Witness as he spanks two out of control gang members in class with brute force. This so wouldn’t get made today which is why it’s even more enjoyable.

Patrick Kilpatrick and Pam Grier are also clearly savoring any ludicrous minute as the other cyborg teachers which quickly get out of control.

I liked Bradley Gregg as our gang member hero Cody Culp who has been recently released from prison and trying to stay on the straight and narrow; when friends and family start to die mysteriously he can’t help but get involved.

Directed by Mark L. Lester form Commando fame, the action in Class of 1999 is superb throughout with car chases, explosions and fights every few minutes. It wastes no time in getting going and moves at a good pace until the explosive finale. There are some awesome kill scenes and at times you aren’t sure whether to laugh or be disturbed… I laughed.

Sure, some of the robot effects at the end are a little dated looking but I’ve seen worse and I loved every minute of it.

Plot: The destructive cyborg teachers created by Doctor Bob Forrest were thought to have been destroyed, but one has slipped through the cracks. Now the last, calling himself John Bolen, must be stopped before he spreads his path of destruction and mass killings to other high schools.

This sequel is quite a different beast from the first movie which isn’t necessarily a bad thing. There isn’t the same sense of a world in chaos that the original had and you can tell this one has a smaller budget.

It does at least have Sasha Mitchell as our Substitute teacher this time around who once again takes no shit from students.

Although this is quite a different movie from the first I enjoyed the story and Caitlin Dulany very sympathetic as a teacher called Jenna who wants to testify against a gang member she saw kill another student. So she is terrorized throughout the movie by said gang member and his cronies but we find John Bolen (Mitchell) is never far away and always seems to be around to save her. But is he a hero… or something else?

Mitchell gets to show off his martial arts skills as we certainly get better fight scenes in this movie; he does his best Terminator act too walking around wearing shades a lot and trying not to show any emotion. And don’t worry at some point he does say ‘School’s out” which was necessary really…

Like the first movie this also isn’t particularly long, coming in at under 90 minutes so it’s an easy watch. It doesn’t have the same scale in terms of action and the kills are more forgettable but the fact it wasn’t a rehash of the same story again was a nice touch. I also liked the twist at the end which I didn’t see coming… which probably makes me an idiot but you know that already.

As much as I enjoy both movies I have to go with Class of 1999; it has a better cast, bigger scale and more brutal kills so it’s just science. The Substitute is still a damn fine sequel and if you have the chance to pick them up then I would ASAP. Class dismissed!