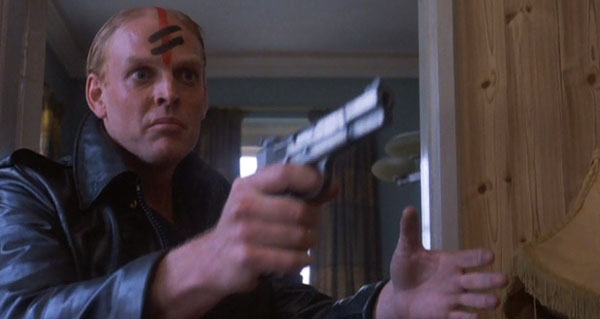 SYNOPSIS: When architect-turned-vigilante Paul Kersey (Charles Bronson) returns to New York City, he discovers that one of his friends has been murdered by gang members. After the cops bring Paul in for questioning, he receives a tempting offer from the police chief (Ed Lauter) : Paul can have free rein to eliminate the gangsters, as long as the police get the credit. Paul agrees and goes to war against Manny Fraker (Gavan O’Herlihy) and his vicious gang of thugs.

Death Wish 3 bad guy Fraker (Gavan O’Herlihy) may arguably by the most memorable villain of the series; his weird haircut, warpaint and menacing stare just made him intimidating as Hell but it’s a good thing Paul Kersey puts an end to his reign of terror.

In this classic scene it looks like Fraker is going to have the upper hand but Kersey has other plans… genius.