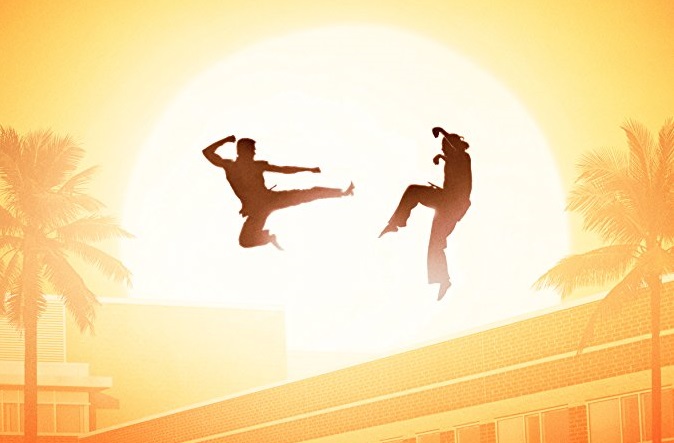 Cobra Kai is an unexpected gem with heart, humour and plenty of face punching. Fans of the original movie will love every second and it’s easily the best sequel of the series. No Mercy!

Plot: Set thirty years after the events of the 1984 All Valley Karate Tournament, the series focuses on Johnny Lawrence reopening the Cobra Kai dojo, which causes his rivalry with Daniel LaRusso to be reignited.

Review: Like most other people I couldn’t take to Daniel LaRusso from The Karate Kid; he really was an interfering little bitch and frankly deserved what he got from Johnny Lawrence. It was always Mr. Miyagi who was the hero of the tale for me.

Anyway, Cobra Kai really is a revelation and never goes in the predictable directions you’d expect it to.

Johnny is still kind of the asshole he always was but he’s also a refreshingly alpha male who finds the whole modern generation a bunch of pussies. He hurls insults at his students (which are utterly hilarious) and yet we are still 100% on his side because he knows how tough real life can be so he tries to prepare them for it. He’s had to fight a lot of his own demons over the years and watch his arch nemesis LaRusso become a wealthy and successful car dealer while he is living in a shitty apartment and has an ex-wife and son who don’t speak to him anymore.

I thought this series was going to make LaRusso essentially be the villain with Johnny the underdog and although it is a little like that LaRusso is still a man of honour and an all round good guy… but he is also a bit of a petty asshole too. There were times when I wanted Johnny to pound his face in and just when we think they’re about to finally have that rematch… “I could eat!” which had me in hysterics.

The writing and dialogue really were first rate with several laugh out loud moments but also genuine drama and heart so it gets the tone spot on never veering into parody.

*mild spoiler* I think episode 5 was my favourite when our other protagonist Miguel (Xolo Maridueña) faces off against the school bullies which is a fist in the air cheering moment. I love the way his story arc progresses as once again it defies expectations.

The star of this show however, is definitely William Zabka as Johnny who looks perfectly broken with years of disappointments etched on his world weary face. Despite that he still has some classic one-liners and most importantly keeps 80’s rock music alive. FYI the choice of music throughout the show was superb really capturing the mood perfectly.

But what of the fights? Well, fear not as they are plentiful and nicely choreographed so we can see everything that happens and get the required adrenaline rush when bad guys get what they deserve.

With THAT ending we really need to have a season two ASAP as I don’t want to be separated from these characters for too long.

Overall, Cobra Kai is a massively entertaining series and a great achievement for all involved; I hope it keeps the same writers for season two as I want more of those one-liners please!