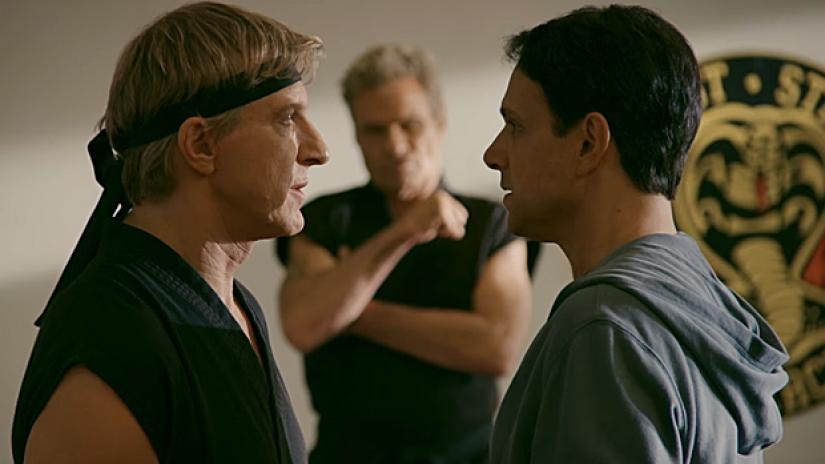 Cobra Kai: Season 2 is another knockout with genuine drama, entertaining fight scenes and characters we care about. It may not be as fresh as Season 1 lacking the acerbic wit that Johnny had but his character has developed nicely and I now can’t wait until season 3…

Plot: The second season expands the rivalry between Johnny Lawrence (William Zabka) and Daniel LaRusso (Ralph Macchio) from a skirmish over petty high school grievances to a battle between very different — and very current — life philosophies.

Review: I don’t think anyone knew quite what to expect from Cobra Kai when we initially heard it was announced and then the first season was released and the majority of us were blown away by it.

It had the right amount of humour, memorable characters, drama, nostalgia and action to make it a winner and it rapidly became my favourite TV series.

Season 2 couldn’t come fast enough but was it as strong as the first one? I’d say for the most part absolutely. The characters are all so well developed and this new season gives them more depth with everyone having their own arc.

Johnny is someone I can very much relate to and William Zabka once again shines; in the first season he had reached middle age and didn’t have much to show for it except for broken dreams and bitterness. Then he met a kid called Miguel (Xolo Maridueña) who showed him a new path: bringing back Cobra Kai and teaching martial arts.

Since bringing Cobra Kai back from the dead his life has turned around; there are more students every week and it is going from strength to strength… that is until someone else comes back from the “dead”: John Kreese (played by the always watchable Martin Kove) who also wants a piece of Cobra Kai but are his intentions pure? I’ll say no more in case you haven’t watched it yet.

It’s great to see Johnny and Kreese on screen together again as every scene is filled with tension; Kreese is unpredictable and you are never quite sure what he’s thinking. Since his return to Cobra Kai certain students like Hawk are no longer bullied but have become the bullies. Miguel has become a little more sympathetic but frankly I still hate him as he’s a dirty cheating bastard.

This show will always be about Johnny and this is essentially his redemption tale; in this season I found he had changed and was a warmer, slightly more sensitive character which was believable but admittedly made him less humorous as the scenes when he was being a dick in the first season were the highlight and provided some laugh out loud moments. He still has his funny scenes though and one in particular has him trying to master modern technology with hilarious results.

Daniel LaRusso has also become more likable and wants nothing more than to honour Mr. Miyagi with the Miyagido dojo but the rising influence of Cobra Kai proves detrimental so Daniel becomes obsessed with bringing in as many students as possible and loses focus on his real job and his wife.

Daniel and Johnny’s scenes together are always magnetic as one minute they’re at each other’s throats but when they spend time together they actually have more in common so it’s a nice dynamic and keeps things moving.

Where the first season captivated us with its nostalgia, the second season provides even more with one of the shining moments including the reunion of the high school Cobra Kai team in episode 6 which was surprisingly emotional but also had an awesome bar fight to keep us action fans happy.

There is no shortage of fight scenes and as always they are nicely choreographed and infused with a shot of adrenaline. The music is well chosen in every episode featuring classic 80’s tunes as well as some amazing electric guitar themed training montages so it captures the spirit of the 80’s perfectly while also feeling contemporary.

I found a little too much time is spent on the teenage students when all we really want to see is Johnny, Kreese and Daniel doing their thing. One of the main focuses is on Daniel’s daughter Samantha and her rivalry with new girl (and possible Anti-Christ) Tory who is just horrible but is a fun antagonist.

The final episode has a massive free for all battle in the school and is spectacular but also hilarious with how ridiculous it gets; then it is brought to a sudden end by… something and I’ll leave it at that.

What’s amazing about this show is no matter what happens it never loses its heart and at various points you’ll be on the edge of your seat either laughing or holding back tears.

For future seasons I hope Terry Silver makes some kind of appearance as that would be amazing. I think I have an idea of where the story will go in the end and it would be incredibly satisfying and the ideal way to finish this saga. It’s the kind of show that I never want to finish as I end up missing the characters and think “I wonder what Johnny is up to right now?” which makes me a bit of a loser but I don’t care.

Overall, I feel like everything I say is a spoiler so I’m going to shut up now and say if you loved the first season of Cobra Kai then you’re going to enjoy this one too. It isn’t quite as funny as the first season but it ends with a hell of a cliff-hanger and Season 3 can’t get here soon enough. So cancel your weekend plans and get binge-watching.