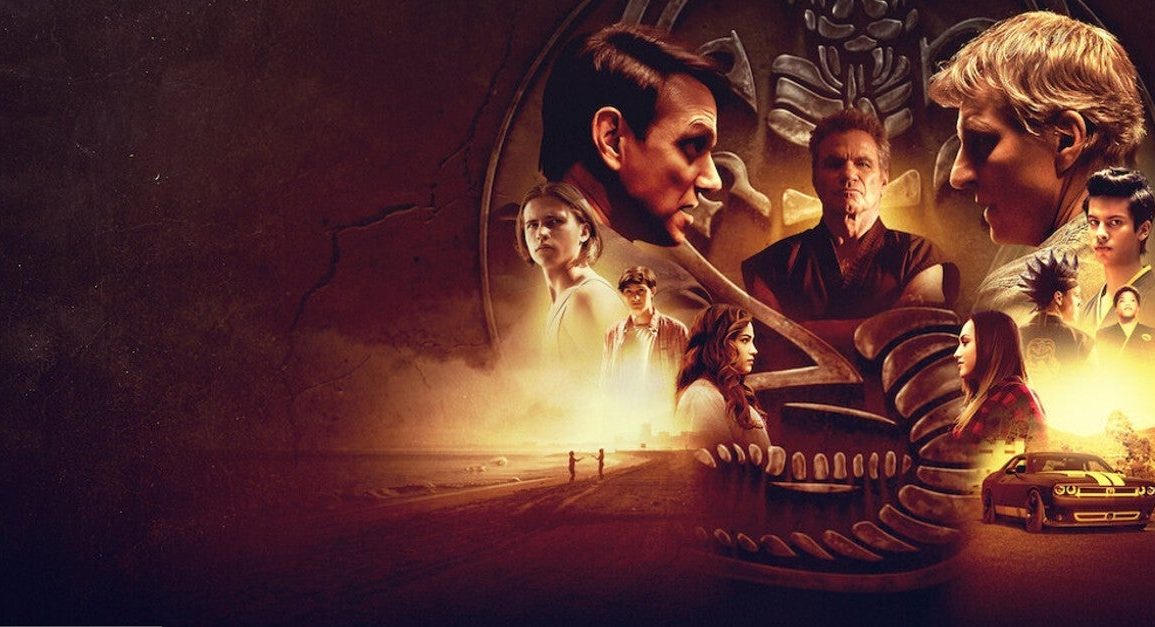 Season 3 of Cobra Kai is consistently entertaining with the right amount of Nostalgia but also giving it a modern edge with the usual sharp dialogue (mostly from William Zabka). Characters are unpredictable and the fight scenes are emotionally engaging so by the end we are left wanting more.

Plot: Season 3 of Cobra Kai turned up the heat on the rivalry front, but the dojos’ greatest challenge is yet to come. Following another knockabout showdown with Cobra Kai, Johnny’s new Eagle Fang dojo and Daniel’s Miyagi-Do group finally united against John Kreese’s violent gang of ruffians and “no mercy” teachings.

Review: I can’t avoid spoilers really so if you haven’t finished Season 3 of Cobra Kai yet then please hold off reading any further.

I’m going to say something controversial here, but I think Cobra Kai is better than any of the Karate Kid movies ever were. They’ll always have a place in my heart, but Cobra Kai just manages to give more depth to the characters, has better dialogue and keeps the nostalgia factor just right without overdoing it.

Season 3 may well be my favourite yet as it continues to defy conventions by giving us layered characters with Johnny Lawrence and Daniel LaRusso continuing their rivalry (but they’re really frenemies) and their students still out of control after the brawl in the High School at the end of last season. Miguel is in a coma and the world of Miyagi-Do is looking grim. Cobra Kai is still under the influence of Kreese (Martin Kove at his sneering best) and the Cobra Kai students are frankly more evil than any previous bullies in Karate Kid were.

Daniel’s car business is struggling so not only is he trying to save that but he’s also trying to look out for his daughter Sam who has been left traumatised after the school fight.

Johnny has hit rock bottom and blames himself for everything that has happened, so he is lost for the first few episodes and his son Robby is still on the run after kicking Miguel off a balcony.

We get a little backstory for Tory (Peyton List) but we don’t really sympathise with her as she makes Satan look like a choir boy in comparison. I so wanted her to get beaten unconscious or thrown in jail by the end but her time will come, I’m sure.

It is hard to root for a lot of the teen characters as their loyalties are all over the place but that’s what being a teenager was and why it’s so engaging with Hawk’s arc especially interesting.

Miguel wakes up and has to learn to walk again but he is finally more sympathetic after becoming a bit of a dick in season 2.

Along the way we get reintroduced to some old characters with a particular highlight being when Daniel visits Japan and reunites with Kumiko (Tamlyn Tomita) and Chozen (Yuji Okumoto). I love how he has matured (as people do) and is no longer the hotheaded youngster he was but is now a wise sensei himself. He gives Daniel some much needed lessons which he can use when he comes home to make things right.

Courtney Henggeler really gets to shine this season as Daniel’s wife Amanda; she is sick of all the karate bullshit and decides to take matters into her own hands… with hilarious results.

It’s only 10 episodes but so much happens in each season of Cobra Kai so I’m not going to go over every little thing. Episode two is maybe the best of the season with some awesome fight scenes but there is never an episode without some thrilling beatdowns. I find with every fight I get more emotionally involved which isn’t good for my blood pressure but it shows how engaging the storytelling is.

Kreese is up there with Emperor Palpatine with the way he manipulates everything behind the scenes and one of the most interesting aspects of this season is getting some backstory about his time in Vietnam and what made him the man he is. Martin Kove must just love having such a high-profile role again; I’m pretty sure he is a vampire too as he has barely aged since the Karate Kid movies. I met him a few years ago in Toronto and he is a much nicer individual in real life.

Robby ends up in juvie but when he gets out he turns away from Daniel and Johnny (his father) who he thinks let him down and goes to Kreese who once again has been pulling strings as only he can. It’s totally The Emperor seducing Anakin to the dark side all over again.

We’ve got the usual awesome 80’s rock tunes and Johnny’s general confusion with the modern world is something we middle aged types can relate to. The return of a certain someone in the last few episodes is a welcome addition and helps Daniel and Johnny settle some of their differences so the season ends exactly the way you would want it to.

The acting and dialogue rarely fall short with Johnny as always stealing the show with his one-liners and refreshing political incorrectness.

Overall, Cobra Kai: Season 3 is another winner with regular fight scenes, surprisingly complex characters and of course 80’s nostalgia with quality music and William Zabka the best he’s ever been.