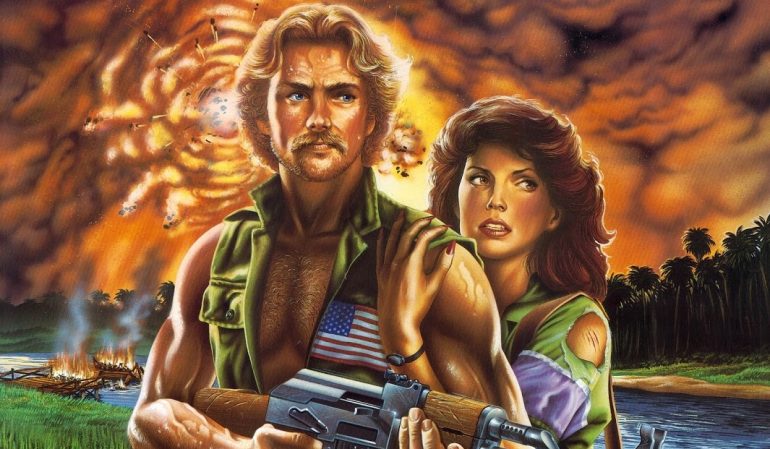 Cocaine Wars is a fun exploitation/One Man Army movie but it only really kicks into gear in the last 15 minutes. Schneider is so awesome that the film gets an extra star for him alone.

Plot: Miami DEA agent Cliff Adams is in South America working undercover for Gonzalo Reyes, the biggest cocaine exporter in South America. Cliff’s fiancée, Janet Meade, is a reporter doing a story about Reyes. Reyes orders Cliff to kill Marcelo Villalba, who is running for his countries position as president, but Cliff can’t bring himself to do it, because his assignment from the DEA is to work against Reyes. Reyes is afraid Villalba will put him out of business, and is afraid that Janet’s story will do the same thing, so Reyes sends someone else after Villalba, and then Reyes has Janet kidnapped, and Cliff is the only one who can keep Reyes’ plans from succeeding.

He eventually gets captured and tortured and just like Rambo II, he ends up turning the tables and becoming the ultimate one man army.

It’s a bit slow in the first half and it has a miniscule budget, but Cocaine Wars is good fun and Schneider’s arrogance just makes the character of Cliff incredibly entertaining to watch.

The music is pretty bad, being cheap and keyboardy sounding, but that’s the charm of these kinds of movies. I have always been a fan of exploitation, like Strike Commando or Deadly Prey so this movie was right up my street. I mean, look at that poster! It’s awesome!

The final 15 minutes are pretty satisfying with plenty of goons getting their comeuppance. I found I didn’t really hate the bad guys enough though because Cliff really wound them up and he frankly got what he deserved.

Most of the acting is obviously bad but Schneider kicked it out of the park, utterly owning the movie.

Overall, Cocaine Wars is a fun exploitation/One Man Army movie but it only really kicks into gear in the last 15 minutes. Schneider is so awesome that the film gets an extra star for him alone.