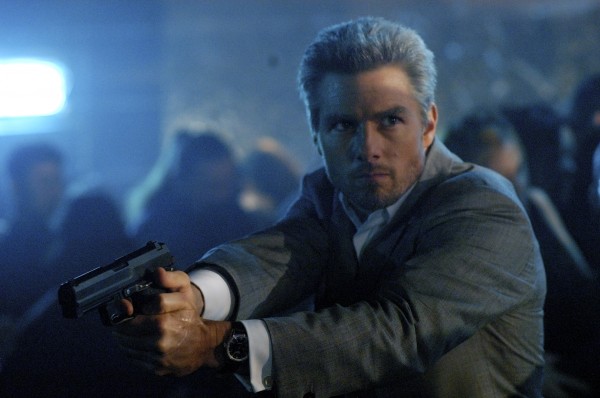 It’s not sufficient though for me to give this any less than 5 stars; it’s a bit of a classic and the perfect movie to watch late at night.

Plot: A cab driver finds himself the hostage of an engaging contract killer as he makes his rounds from hit to hit during one night in Los Angeles. He must find a way to save both himself and one last victim.

Review: I think Collateral is not only my favourite Michael Mann movie, but also my favourite Tom Cruise role; his character Vincent is cold and ruthless, yet likable at the same time.

The grey hair and suit are a great look and he hardly seems like Cruise at all; he’s surprisingly good as a villain and it’s the sort of role I’d like to see more of from him.

The movie gets unbearably tense in places but what keeps the story the most interesting is the relationship between Vincent and taxi cab driver Max (Jamie Foxx).

Max is a nicely developed character because he is like so many of us; always talking about working towards his dream of owning his own business, but always finds a reason to never actually do it.

He’s more of a dreamer but by the end of the movie he realizes that he is going to have to take action to save the life of his previous passenger Annie (played by Jada Pinkett-Smith).

During some of the movie you will shout at the screen wondering why Max does some of the things he does, because you just know it will end badly.

As with every Mann movie it’s beautifully shot, and the city of Los Angeles looks fabulously dream like. The perfect use of music during key scenes is what Mann excels at and Switch On by Paul Oakenfold provides the score to the best action scene in the movie, set in a nightclub. Vincent is at his most vicious in this scene not caring who gets in his way.

Collateral moves along at a great pace but also let’s the characters develop too. The only flaw is sometimes I can’t understand what Jamie Foxx is saying and the finale is a bit of a letdown.

Overall, it’s not sufficient though for me to give this any less than 5 stars; it’s a bit of a classic and the perfect movie to watch late at night.