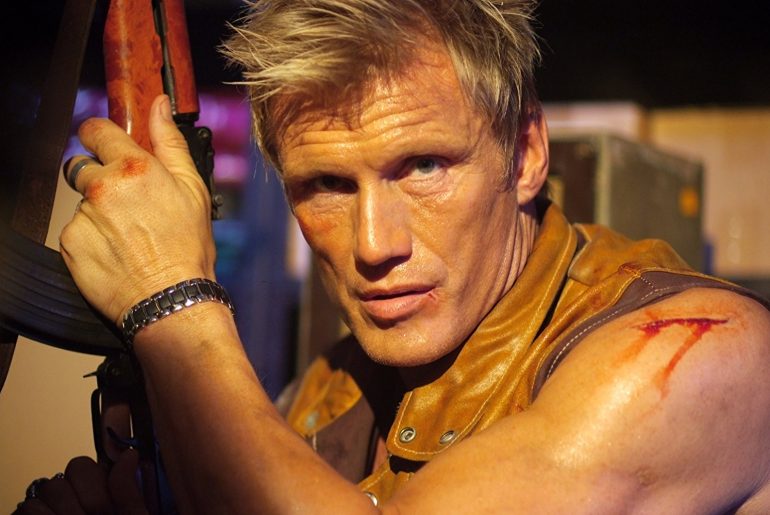 Command Performance is Dolph doing what he does best with some hardcore violence, a strong villain and likeable supporting cast.

Plot: When the Russian Premier is taken hostage at a rock concert in Moscow, it’s up to a drummer, an ex-biker, to save him.

Review: Dolph Lundgren directs and stars in this enjoyable ‘Die Hard at a Rock Concert’ movie; he plays a drummer called Joe and he is forced to take down some terrorists who have taken the Russian President and his family hostage.

Dolph never plays ordinary characters which is why he’s one of my favourite action stars; why he wanted to make Joe a drummer is beyond me but that’s why it’s kind of awesome. He’s not a cop or superhero; just a guy trying to do the right thing.  This being a straight to DVD affair there isn’t anything all that spectacular in the way of action and there is an annoying use of shaky cam during some of the fights.

It does have plenty of hard R violence though; it’s surprisingly brutal with people being stabbed in the head, audience members being gunned down and more.  The bodycount is off the charts on this movie and it also has a perfectly nasty villain in Oleg Kazov played with the late Dave Legano. He sadly passed away at age 50 last year and was best known as Fenrir Greyback in the Harry Potter series.

Kazov is a great bad guy who is vicious and ruthless; he won’t hesitate to kill his own men if he thinks they aren’t up to the task.

It’s well paced but it does lack an exciting plot twist or even a double cross which I thought would happen but didn’t.

Dolph is just having a ball as Joe though and he’s so instantly likeable that watching him happily bring the pain to the bad guys is incredibly satisfying and it actually brings back the awesome bad guy death of old.

Melissa Molinaro is gorgeous as pop star Venus and wasn’t the annoying character I expected her to be so I liked how some aspects of the film didn’t quite go the way you’d expect.

It is essentially just another Die Hard clone so it isn’t all that original but there are interesting things which make it stand apart. I enjoyed that it was set in Russia with their president in danger rather than the US which is something we don’t get to see too often.

Overall, Command Performance is Dolph doing what he does best with some hardcore violence, a strong villain and likeable supporting cast.